US White Population Falls for the First Time 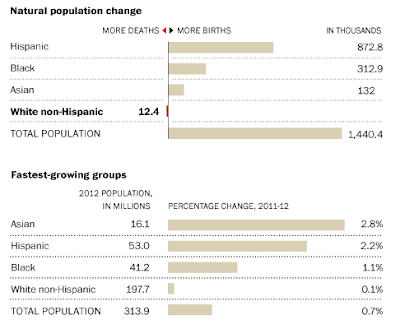 I expect horrified groans from Pat Buchanan et al. to greet the news that for the first time ever -- or since the starving time at Jamestown, anyway -- more white Americans died last year than were born. Immigration from Europe actually led to a small rise in the white population, but a glance at the second table shows you how fast the nation is losing its whiteness.

Over the next decade I expect that Hispanic immigration will slow drastically and that the Hispanic birth rate will fall toward the average. So the interesting factor may be the very rapid rise in the Asian population; after all, there are probably a hundred million Asians who would like to move here. Since most Asian immigrants these days are not Christians, that introduces another element of diversity into the American mix.
Posted by John at 7:10 AM