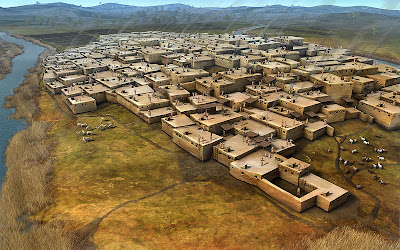 The early Neolithic villages of the Middle East were tightly packed affairs. As the above reconstruction of Çatalhöyük around 7000 BC shows, the houses there were built right up against each other, without even streets or alleys and no way in except for through the roof. Why, in such an empty world, did they cram their houses so close together?

Ian Hodder, who directs the ongoing excavations at Çatalhöyük, has long maintained that these early villages did not arise because of any pressing economic need, but because people wanted to live close together. The close-knit communities came into being because people chose to live that way, not because they had to. The richness of interpersonal interaction, the density of art, the numerous house-shrines, and the elaborate ritual life were their own justification. 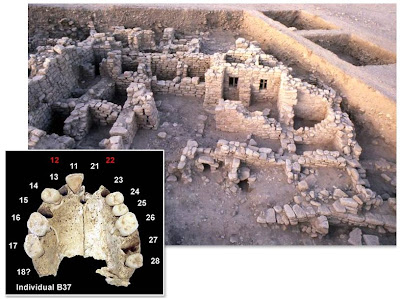 It is in this context that I found interesting the discovery, just announced, that the population of the early Neolothic village of Basta in Jordan was highly inbred:


Ten skeletons, or about 36%, had a rare genetic anomaly called bilateral maxillary lateral incisor agenesis (MLIA), in which the outer incisors on both sides of the upper jaw are missing. . . . This very high incidence of the defect is strong evidence for inbreeding among the Basta population, the team reports this month in PLOS ONE. The normal incidence of MLIA among today's populations rarely exceeds 4%. The one known case that comes at all close to that of Basta, according to the team's literature search, is that of a small village in Switzerland where nearly 80% of the marriages were to family members over the past 230 years. In that village, 21% of the inhabitants had MLIA, and everyone with the genetic defect could trace their ancestry back to one couple that lived in the early 18th century.

The village was not geographically isolated, and much evidence was found of trade with other communities:


including raw materials such as turquoise and obsidian and finished artifacts such as mother-of-pearl amulets, stone rings, and stone tools similar to those found elsewhere in southern Jordan.

The villagers married each other because they wanted to. Because, in a sense, the whole point of living in these densely packed villages was the very strong ties between neighbors, ties that they preferred to strengthen through marriage alliances rather than dilute by bringing in outsiders.
Posted by John at 7:35 AM

I found the mock up of the villages very similar to the Pueblo style villages in Northern New Mexico. Especially Taos Pueblo, the clans there have very specific rules for marriages, with some clans not approved to marry others.