A New Map Does not Explain Lee's Decisions at Gettysburg 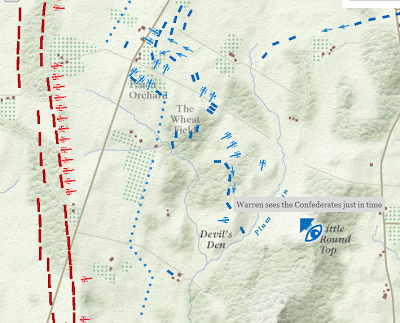 It's these people who always think that their new technology or their new insight or whatever will overturn all the received wisdom. We hates them all. And now comes a new bunch, GIS analysts this time, claiming that their new map "may explain Lee's decisions at Gettysburg." What is particularly galling about this claim is that Lee's decisions at Gettysburg have already been explained to the satisfaction of every Civil War buff I know.

But in the guise of fairness, I will allow them to present their case:


On the second day of fighting at Gettysburg, Confederate Gen. Robert E. Lee listened to scouting reports, scanned the battlefield and ordered his second-in-command, James Longstreet, to attack the Union Army's left flank. It was a fateful decision, one that led to one of the most desperate clashes of the entire Civil War — the fight for a piece of ground called Little Round Top. The Union's defense of the boulder-strewn promontory helped send Lee to defeat at Gettysburg, and he never again ventured into Northern territory. Why did the shrewd and canny Lee choose to attack, especially in the face of the Union's superior numbers? 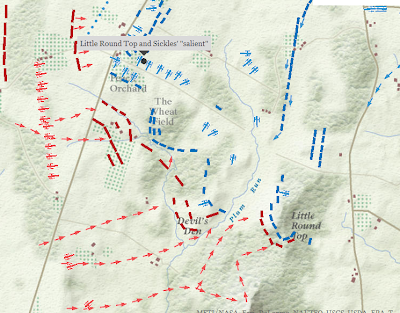 Does this have to be explained again? Because if this is mysterious to certain contemporary historians, it was certainly not mysterious to anyone in 1863. Every soldier in both armies knew that Lee would attack if given a chance. On the night of July 2, Meade convened a staff meeting and polled his Corps commanders about what to do the next day. Every single one agreed that Lee would attack again, and that the best approach for the Union army was to stay on the defensive. How did they know?
But no, these factors apparently pale in comparison to the BIG NEW INSIGHT, which is that


From his vantage point, Lee simply couldn't see throngs of Union soldiers amid the hills and valleys. "Our analysis shows that he had a very poor understanding of how many forces he was up against, which made him bolder," said Middlebury College professor Anne Knowles, whose team produced the most faithful re-creation of the Gettysburg battlefield to date, using software called GIS, or geographic information systems.

I can only throw up my hands.

Maps are great. GIS is cool. But in this case GIS only substitutes for the way people have understood the battlefield since 1863, which is by visiting it and walking around. No serious historian would ever write about a battle without visiting the site and exploring it on foot or horseback or however it was the commanders saw it. Since 1865 the US Army has been staging "staff rides" during which officers explore battlefields in just this way, often with first-hand accounts of the battle in their pockets, trying to see what it was that soldiers and commanders saw. Every good battlefield tour guide -- Gettysburg has several outstanding rangers who give awesome tours -- will point out the key lines of sight and explain when it was crucial that commanders could or could not see things. Park planners, as I know from experience, use these lines of sight as key factors in laying out their trails and waysides.

Yes, what commanders could and could not see was often crucial in battle, and everybody already knows this. 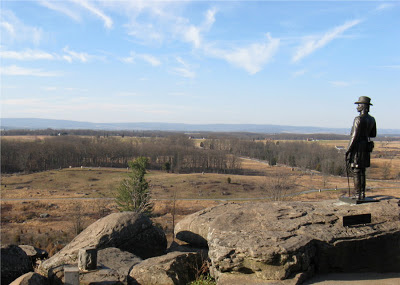 To get back to Gettysburg, Lee certainly could not from his vantage point understand the complex terrain around Little Round Top and the Devil's Den or tell how many men defended it. As things turned out, though, that obscurity was an advantage for Longstreet's men, neutralizing the superior Federal artillery and preventing them from massing their greater numbers against the Confederate assault. This attack was very successful, considering that the attackers were outnumbered, and some people think it came very close to breaking the Union line and driving them off Cemetery Ridge. Since Lee was by nature a bold risk-taker and in this circumstance was determined to force a battle if there was any chance of victory, knowing the actual odds would only have encouraged him.
Posted by John at 12:55 PM