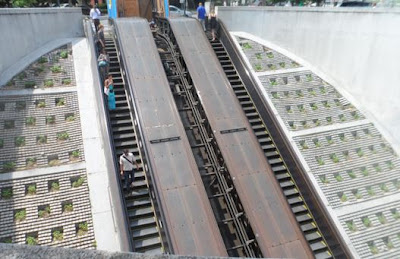 Quirky garden artist Henry Docter has been surreptitiously planting flowers in public places on four continents since 1979. His unauthorized beautification efforts have frequently aroused surprise and delight — but never a problem until this month, when he ran afoul of Washington’s Metro transit system.

Metro threatened Docter with “arrest, fines and imprisonment” if he dared to weed, water or otherwise tend to more than 1,000 morning glories and other flowers whose seeds he planted in 176 barren flower boxes alongside the top stretch of the north escalators at the Dupont Circle station. . . .

“I’m not denying that I’m a little nuts,” Docter said. He calls his plantings a form of performance art, saying, “Flowers are nature’s way of affirming how beautiful life can be.”

Sigh. What are the people who make these inane bureaucratic pronouncements thinking? How can they possibly believe that this is the right thing to do?