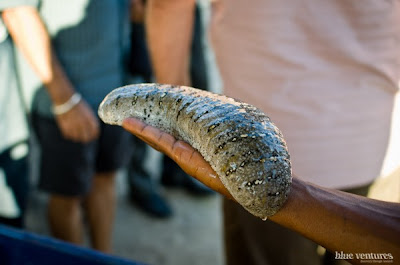 Twenty years ago, impoverished farmers on the southwest coast of Madagascar discovered a new way to make money: harvesting sea cucumbers. Very popular in China and Japan, these monstrously ugly beasts could be found in large numbers in Madagascar's coral lagoons. A new industry was born. In fact, the locals got so good at harvesting sea cucumbers and sold so many to east Asian gastronomes that wild sea cucumbers pretty much disappeared. 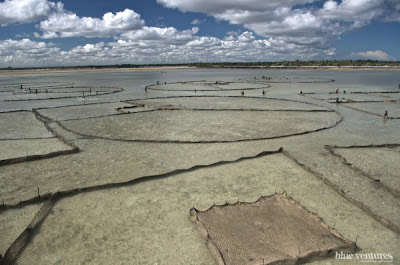 But this story has a better ending than that. A British eco-charity called Blue Ventures ("a science-led social enterprise that works with local communities to conserve threatened marine ecosystems and coastal livelihoods") stepped in and helped the locals set up sustainable sea cucumber farms. So far, this is working very well, with production holding up, no catastrophic environmental damage, and a nice new source of income for the locals, who are earning an average of $30 per month. 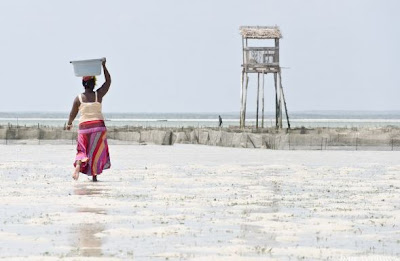 The farmers' biggest challenge is actually keeping poachers from stealing their livestock, so they have to mount a 24-hour guard in that tower. 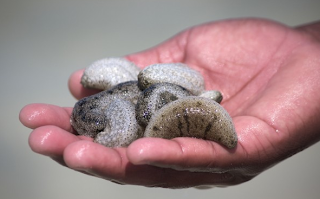 It's an interesting approach. The world's poorest communities understand conservation because they have to; if they don't conserve, they starve. They are used to being cautious with their resources. Their financial goals are modest -- a new tin roof, elementary school education for their children -- and they expect to invest a lot of labor for a reward that seems paltry to us. So, according to Blue Ventures, it is comparatively easy to teach them sustainable fisheries management. Over the next few decades this business of helping peasants exploit their environments in sustainable ways may pay off well. What happens when the standard of living rises in these areas, and their economic expectations leap into the modern world, is another story. Korea and Japan both sustain communities of traditional seafood harvesters with massive subsidies, but in the rest of the developed world they have pretty much disappeared, replaced by either commercial fishing or barren, over-fished waters. But that is probably a long way off for Madagascar.
Posted by John at 10:48 AM