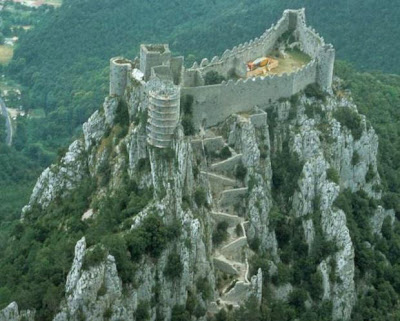 Le Château de Puilaurens is one of the "Cathar Castles" in the hills above Carcassone where Cathars are supposed to have taken refuge during the Albigensian Crusade (1209-1229). It sits on a rock at an elevation of 2300 feet (700 m), accessible only by that steep, zig-zag  path. 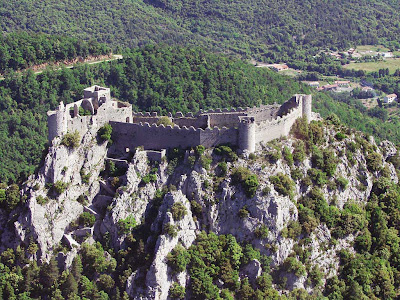 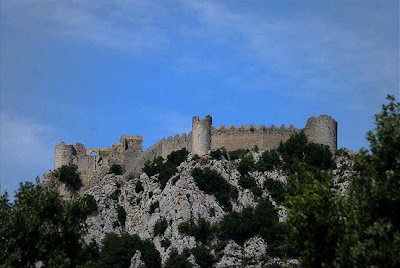 Founded in the 11th century, it was acquired by the Queen of Aragon in 1162. Its location within Aragon protected it from the attentions of the crusaders, and the castellans were from the Saissac family, who are thought to have been Cathar sympathizers. Some time between 1229 and 1255 it was acquired by the French crown, and in the Treaty of Corbeil (1258) this whole district became part of France. 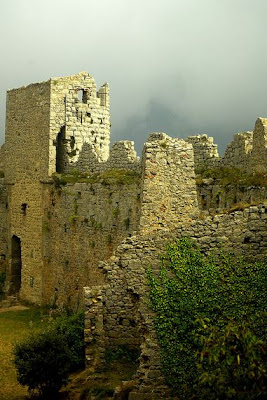 After the treaty the castle was rebuilt on the orders of St. Louis. It became one of the "Five Sons of Carcassone," five castles that guarded this part of the border for the French king. Most of what you can see today dates to this period. It was besieged by the Catalans twice in the fifteenth century and then taken by Spanish troops in 1635. The Treaty of the Pyrenees (1659) moved the border several miles to the south, and the castle, no longer strategic, was largely abandoned. 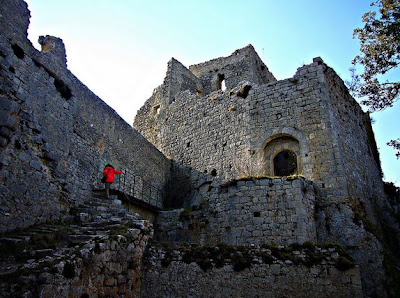 The questions surrounding the Cathar heretics and the Albigensian Crusade are among the most vexed in medieval history. Everything is disputed. The standard account is that the Cathars were dualists who believed that this world is largely under the control of the evil god, but some historians think this was all invented by learned churchmen who read about such things in St. Augustine and imposed it on the Cathars through imprisonment and torture. Some people of this region certainly supported an alternative religious structure led by men called "Perfects" or "Good Men" who wandered through the countryside preaching. These men distrusted the church hierarchy, but what they believed about god and the universe is, I am sad to say, all but unknowable. 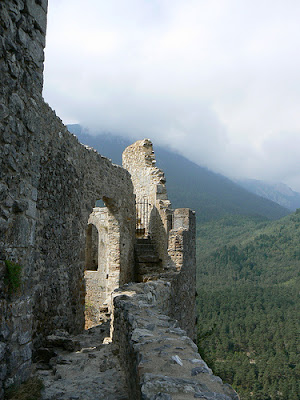 Whatever they believed, the church thought they were heretics, and in 1208 the Pope declared a crusade against them. This was taken up by ambitious nobles from northern France and evolved into a sort of war between north and south, at least as much politics as religion. The end result was to bring this region much more firmly under the control of the French king, and to reduce the cultural independence of the south as well. And this explains why so many good Catholics in southern France have for centuries honored and the mythologized the Cathars. By this time it is impossible to separate out the various strands of folklore, wishful thinking, and actual history that surround the whole problem. One can read in learned-seeming books by respectable gentlemen of the south that many Cathars took refuge in this or that castle, but then see in another book that these refugees are first mentioned in 1835. So I will simply pass on that some historians say many Cathars took refuge in Puilaurens -- you can believe this or not depending on whether you feel skeptical or romantic. Certainly there is one inquisition record of 1241 in which it is asserted that a well-known Perfect was hiding at Puilaurens, but on the other hand there is no special reason to think that this assertion was true. 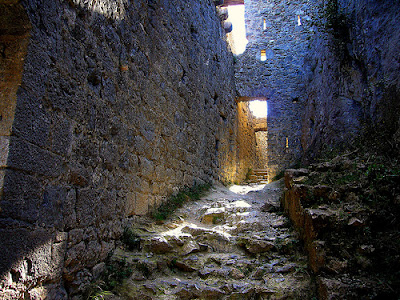 Even more obscure is the question of how the castle came into the hands of the French king. When the crusaders were fighting, it was certainly Catalan, but then suddenly in 1255 there is a French record describing its French garrison. Local tradition maintains that it was taken by force and numerous Cathar sympathizers executed, but that is something lost behind he veil of lost records, oral tradition, and tales made up for tourists. 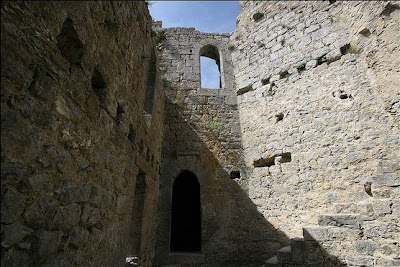 But one thing I can tell you about the castle is that it has a "Tower of the White Lady", haunted by a ghost of that description. Or so people say. 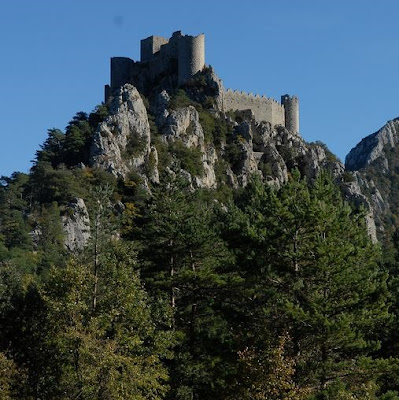