Today's Place to Daydream About: the Aran Islands 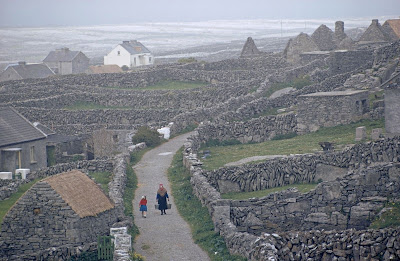 The Aran Islands are three small limestone island off the west coast of Ireland: Inishmore, Inishmaan, and Inisheer. The largest, Inishmore, is nine miles long and two miles wide at the widest (14x3 km). Once a lonely, largely forgotten place, the isles have lately become a vacation spot for those who really want to get away from it all. 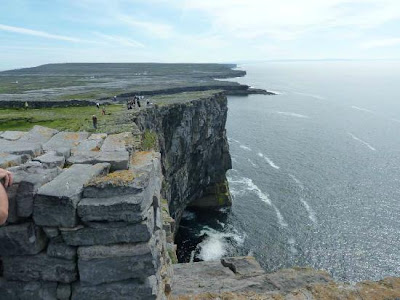 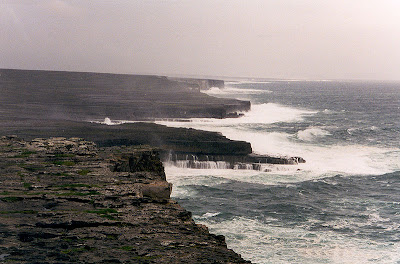 The western side of the islands is exposed to the winter gales that blow in from the Atlantic. 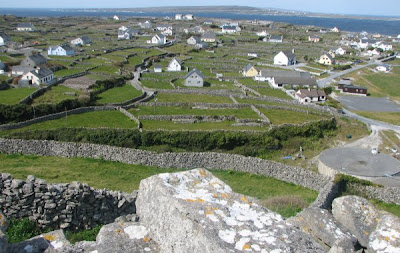 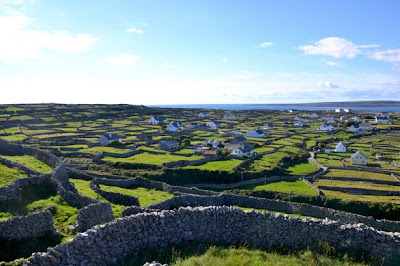 So all the settlements are on the more sheltered east side. 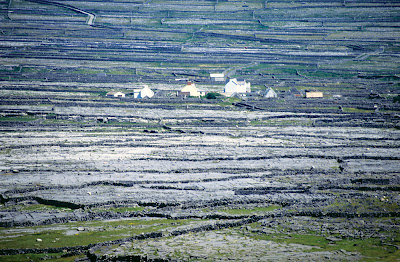 The stone walls are one of the most prominent features of the landscape; there are more than a thousand miles (1600 km) of walls on the islands. 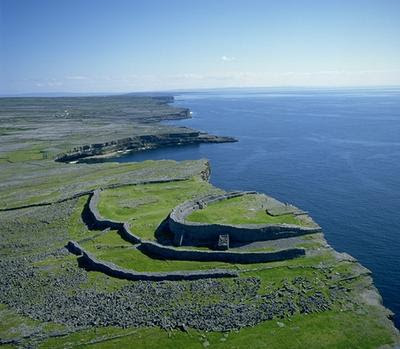 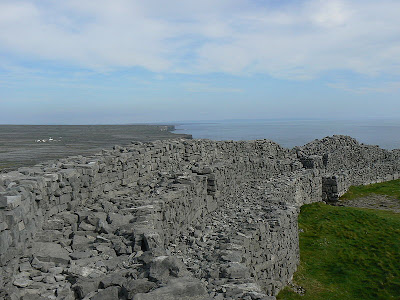 The most famous monuments on the islands are two stone forts on Inishmore, Dun Aengus and Dun Eochta. Dun Aengus, built against the cliffs, is featured in every picture book about the Celtic past. Its history, however, is obscure. Radiocarbon dating has shown that the site was occupied by 1100 BCE, but opinions differ as to whether the great wall was built then or around 200 CE. Opinions also differ as to whether it was once a circular fort, half of which has been lost to erosion. And nobody knows why such an impressive and expensive fort was built on this tiny island. Was this the lair of a pirate chieftain? An important religious site? To make the problem worse, there are actually seven ring forts in the islands, all of disputed date, leaving us to imagine that the place might have been full of feuding warlords. Local folklore insists that all were built by the Firbolgs, the pre-Irish inhabitants of Erin. 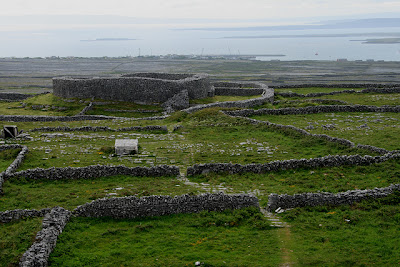 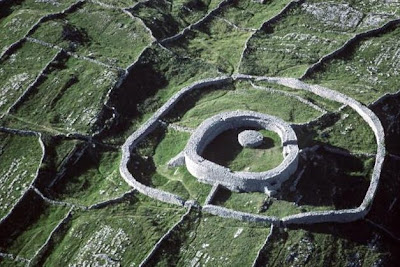 Not far away is Dun Eochta, built on the highest point on the island. The best guess is that this fortress dates to between 500 and 800 CE, so it was probably not built until after Dun Aengus was abandoned. Probably. The walls here and at Dun Aengus were largely rebuilt in the 19th century, but on visible foundations using stone that was lying around the site. 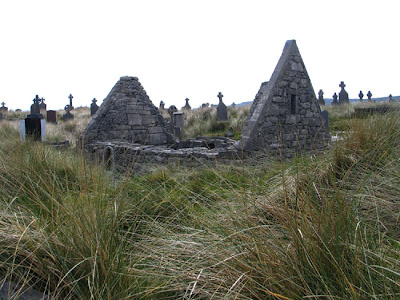 The Irish monks of the fifth through tenth centuries liked to live in remote spots, so they flocked to the Aran Islands. There were at one time at least a dozen monasteries on Inishmore alone, which began calling itself "the island of saints and scholars." St. Columba once called it "the sun of the west." The ruins of monastic huts dating back to the eighth century can be seen in several places. This is the ruins of Teaghlach Einne, Enda's Household, a monastery supposed to have been founded in the fifth century. The church dates to the eighth century. 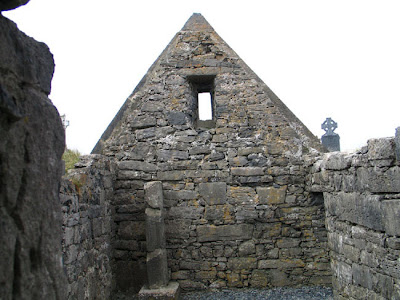 Here St. Brendan is supposed to have studied before setting off to explore the Atlantic, and 120 saints are said to lie in the graveyard. 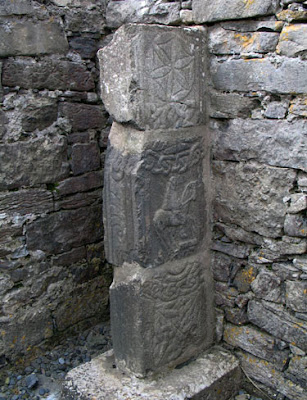 The remains of an ancient cross, probably dating to the 11th century. 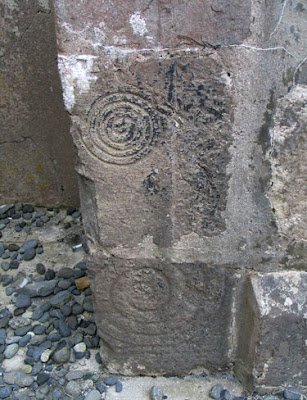 Spirals carved on the altar. 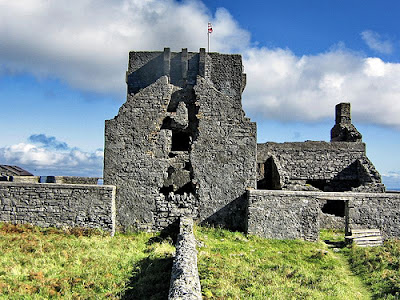 Ruins of more recent date also dot the islands; above, the Inishmore lighthouse. The origin of the current inhabitants is an obscure as almost everything else about the islands' past. Some say they fled to the island during Cromwell's invasion, others that they descend from the original Bronze Age inhabitants. One argument in favor of a recent settlement is that the only sort of agriculture on the islands is completely dependent on potatoes, grown in soil made from sand and seaweed. The islands were discovered by antiquarians in the 19th century. Most of Ireland's famous folklorists visited at some point to collect stories, watch the knitting of the famous local sweaters, and hear what was said to be the Irish dialect least contaminated by foreign tongues. A group of oral autobiographies collected on the islands in the 1930s used to be used to teach Irish in Irish schools. 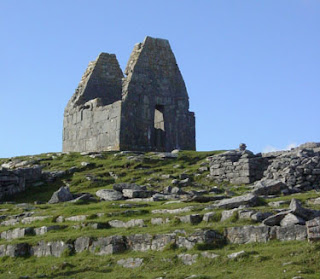 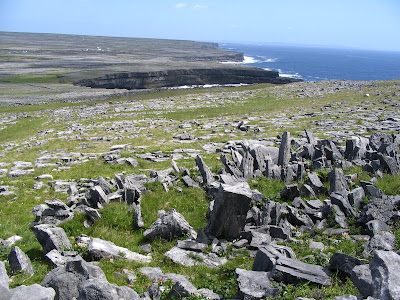