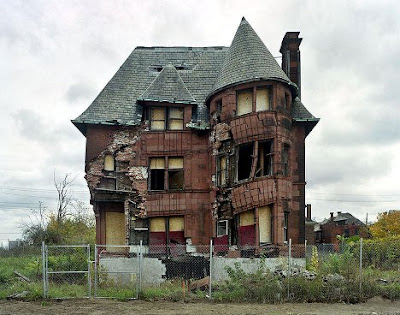 Felix Salmon found some grim reading in Detroit's Proposal for Creditors, explaining why the city has to repudiate some of its debts:


Detroit has the highest violent crime rate of any major US city, at five times the national average; there were 344 murders in 2011, of which just 39 were solved. Right now, the average response time, if you put in an emergency call to the Detroit Police Department, is 58 minutes. Detroit’s infrastructure is crumbling: 40% of its street lights are out of order, and it has 78,000 abandoned and blighted structures, of which 38,000 are considered dangerous buildings. Those buildings account for a large proportion of the 12,000 fires Detroit has every year. At the moment, firefighters are instructed not to use the hydraulic ladders on their firetrucks unless there is an immediate threat to life, because the ladders have not received safety inspections for years. Detroit also has just 36 ambulances, of which generally no more than 14 are in operation at any given time. And in terms of the city’s IT infrastructure — well, you can probably guess; suffice to say that a recent IRS audit characterized the city’s income tax system as “catastrophic”. 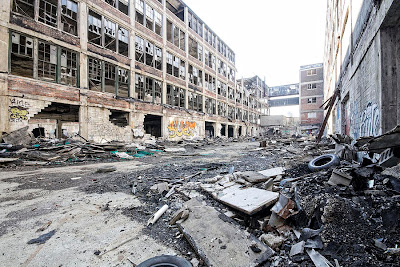 The only proposal I have ever heard that might really turn the city around was Matt Yglesias' suggestion that we let 200,000 immigrants into the US on the condition that they live in Detroit for ten years.
Posted by John at 12:25 PM