Brazilians are Unhappy; But About What? 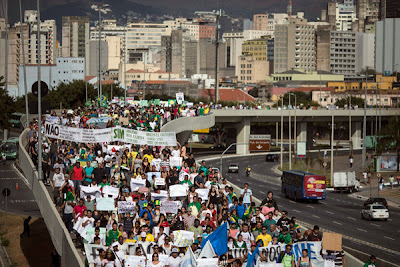 The more I read about the protests in Brazil, the less I understand them. People carry signs that say things like "You cannot stop an idea" but don't say what the idea is. Or, "Sorry for the inconvenience, we're changing the country." Changing it how? It reminds me of the World Bank protests in the 90s, when protesters said things like "I hate the way the rich run the world." 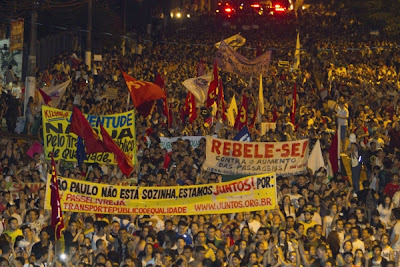 The Times is running one of their Room for Debate features about the protests, and I read my way through the whole thing. What a torrent of vague rhetoric. People say things like this:


Certainly the protests indicate an important change -- from an attitude of passivity and alienation to a demand for participation. There is a diversity of groups and claims in the streets, but with one common goal: a demand to be heard and to participate in decision-making processes.

Great. What does that mean? How about this:


After many years of passivity, Brazilians are occupying the streets in a quest for justice and meaning. Traditional actors, like unions and students organizations, coopted by 10 years of a left-wing government, remain unseen. The street warriors are others. As we say in Brazil: all “tribes” are there. “The people have awakened” is their song.

Ok we're all awake. Now what?


Of course, the “movement” as such does not exist, or does not yet exist. It is in the making, and it comprises distinct agendas and projects. This week, after the government retreated on the bus fare increase, the immediate response on social networks was that the protests must go on. Now that the 20-cent battle has been won, larger political disputes will find room to unfold. In which direction and to what end, we have yet to find out.

And if that was too specific for you, try this:


What all have in common: they heard the call to fight for a better and fairer society and express a dissatisfaction with government. From political parties to parliament, from mayors to state governors and the president – all are held responsible for the awful public services provided to Brazilians, the growing corruption, the inequalities and privileges.

I understand that Brazilians have grievances. Government corruption is rife, especially at the local level; The police are thuggish; many schools in poor areas are awful; same for public health care. Instead of focusing on these bread and butter issues, the government is trying to raise Brazil's international profile by hosting the World Cup in 2014 and then the Olympics, at a cost that approaches $30 billion. But in the bigger picture, Brazil has improved as quickly over the past 30 years as any country has ever improved. Demanding that the government make things even better, faster, feels to me like an act of hubris. Sure, we would all like a better, fairer society, but that's a hard thing to legislate. One of the biggest complaints is over the traffic in the big cities, and there just isn't much the government can do about that at all. 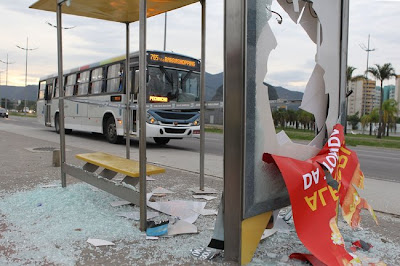 And if you want the government to improve public transit, maybe you should start by not vandalizing bus stops. Rioters who tear up their own neighbors have always mystified me. If you are upset about how other people treat you, wouldn't it make more sense to go tear up their neighborhood?

The only Room for Debate contributor who even mentioned the underlying economics of this is Jerry Dávila, who said,


The demonstrations in Brazil echo the student strikes in Chile. In the decades since these countries emerged from military rule, center-left coalitions have come into national office on pledges to both fight poverty and continue the free market reforms of their predecessors. Protesters in Brazil and Chile alike pose a question: Can these commitments really be balanced?

Right. The free market reforms in both countries created surges of growth that allowed subsequent center-left governments to enact welfare state reforms, which have made both societies more equitable without slowing growth. Now the free lunch created by that very rapid growth is ending, and Brazil faces the sort of balancing act familiar in Europe and the U.S. Further welfare state action to improve the lot of the poor can only be financed by raising taxes on the rich, who of course don't like that idea, and more regulation to protect workers or the environment poses a threat to the industrial growth that made all this possible in the first place.

But all that economic calculus is tedious compared to making cool signs and marching to protest injustice.
Posted by John at 5:40 PM

I won't deny that Brazil has greatly improved economically in the past decades, but the problem you seem to have missed is this, the growth was mostly economic. On a quality of life standpoint however, Brazil has gotten worse as time progressed. Economic growth is good, but quite frankly, the population of Brazil are more concerned about their own safety while walking down the street, or the quality of the education their children are receiving, or whether they will receive quality health care if they need it.
And now, as you mentioned, Brazil is about to host a world cup that is already among the costlier events in history, and many of the stadiums and constructions are still underway (and most likely won't be finished by the World Cup). Worst than that is the fact that these constructions are being funded with public money (the same money that should have been going to health care, education, public safety since very long ago) after promising they would only use private money.
It's not that the government can't make things better and faster. It's that the government should be doing something to begin with. Yes, we love football (soccer if you're in the US), but we value a good quality of life more than a sporting event that will hardly bring any benefit to the actual population of Brazil, basically making the rich richer, and the poor poorer (and there are a lot more poor than rich in Brazil)
About the picture of the vandalized bus stop, that actually showcases only one of our many problems that need some attention, violence. It is one reason there were protesters on the streets last year, and why so many Brazilians are unhappy with the world cup.