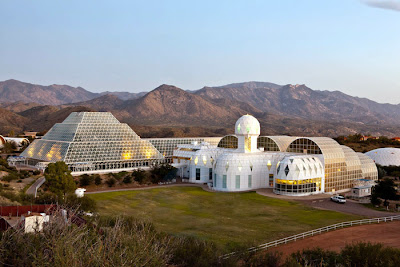 Biosphere II was an experimental facility designed to test our ability to survive in a completely enclosed space for exended periods, a test bed for technologies that might be used in space or in colonizing another planet. The first biospherians entered the building in 1991, intending to stay for two years. The experiment's launch was surrounded by nauseating hype, but then when problems arose the guardians of public morality turned against the whole thing with vicious contempt. At first I nodded smugly at these exposés, since the hype had bothered me so much. But then I read an article, I can't remember where or by whom, that made me think again. If the thing was overhyped at first, it also never deserved the enraged contempt that greeted its troubles. Looking back, the whole thing seems very odd. 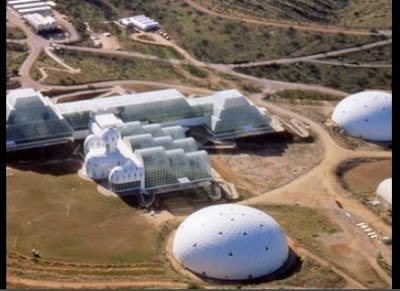 Biosphere II -- Biosphere I is the Earth, get it? -- was conceived by engineer John Allen and paid for mainly by his friend, billionaire Ed Bass, who put up $150 million. As events showed, Allen was a highly capable engineer, but he was also the leader of a sort of doomsday cult based at the Synergia Ranch. He wanted to develop these technologies because he was sure -- may still be sure, for all I know -- that humans were going to destroy the Earth in short order. Many of the complaints I heard at the time, and still hear, have to do with the lack of scientific credentials of the biosphere team. I despise that sort of crap; who cares how many degrees they had? And who but a bunch of weirdos would have done this?

Now that the experiment is 20 years in the past, we can perhaps get a better idea of what was achieved, and what went wrong. 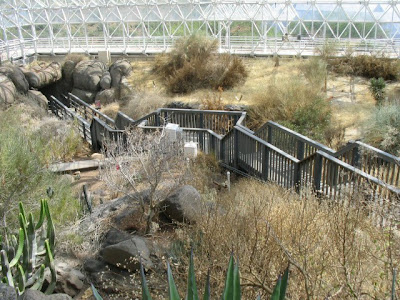 Biosphere II is still the largest completely enclosed habitat ever created, and it was pretty close to being completely enclosed. The rate of air loss was less than 1% of what the International Space Station loses.  The facility included a 2,500 square meter (1/2 acre) farm, living quarters, and "representative biomes":

I remember thinking that the biomes seem to have been chosen by how cool they are -- why a coral reef? -- but I suppose they had to pick something. Heating and cooling were by passive solar power, with a small natural gas plant for electricity. 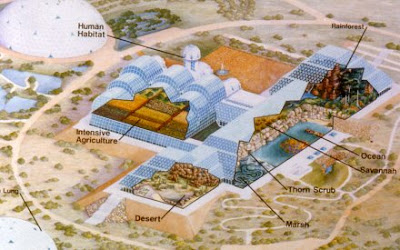 For a first attempt, it actually worked pretty well. Some people predicted that the whole place would turn to slime in a matter of months, but that did not happen. The experiment was plagued throughout by rising carbon dioxide levels, which got as high as 4000 ppm (more than ten times the level in normal air) and falling oxygen, which dropped from 22 to 14 percent. The low oxygen level was like living at an altitude of 13,000 feet (4,000 m), and some of the biospherians suffered from sleep apnea. Things got so bad that the team had to turn on their emergency CO2 scrubbers several times, and once had to inject a large amount of oxygen. Critics said this "totally invalidated" the experiment, which I suppose in a sense it did. But what were the odds of getting such a complex system right the first time? And what mission to another planet wouldn't have emergency backup systems? The problems with the atmosphere proved, in a way, how effectively sealed the system was:


The discovery of the small difference between rate of respiration and rate of photosynthesis depended on the extremely low leak rate of Biosphere 2. . . . had Biosphere 2 leaked as much as other closed ecological test chambers, the wash-out effect of outside air mixing in would have concealed the entire imbalance

The best guess as to what went wrong with the atmosphere was a combination of exposed concrete, which soaked up oxygen, and soil bacteria. Soil bacteria live in fiendishly complex communities of hundreds of species, and despite a ton of research over the past 20 years (climate change, you know) we still don't understand them very well; what happened to Biosphere 2 certainly seems within the range of their behavior.

The biospherians also had trouble raising enough food, which is hardly surprising given their 1/2 acre farm. They all lost weight, one of them over 50 pounds. But plenty of explorers have gone hungry before, and, again, what planetary mission wouldn't have an emergency reserve? There was a lot of hype when one of the biospherians left for medical treatment and then went back in with a duffle bag, which critics said was probably full of food. The biospherians said it was mainly mail, along with plans and some tools, but even if it was food it was just one duffle bag. Not much over two years. 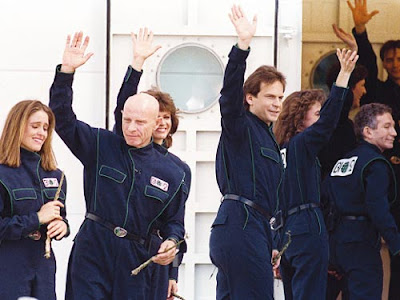 The biggest problem was actually not science, but personality. The usual frictions of life in a closed space were worsened by the high CO2 levels, which make people cranky (as in Apollo 13), and the starvation diet, leading to a nearly complete breakdown in the crew:


Before the first closure mission was half over, the group had split into two factions and people who had been intimate friends had become implacable enemies, barely on speaking terms.

The second attempt at a biosphere mission was actually sabotaged by two people from the first mission who, for reasons never explained, opened the air lock and smashed one of the glass windows. But the first biospherians did manage to stay inside for the whole two years, to my amazement. Sadly for them, the various scandals and blow-ups over those two yeas meant that their leaving was greeted very differently from their entering. 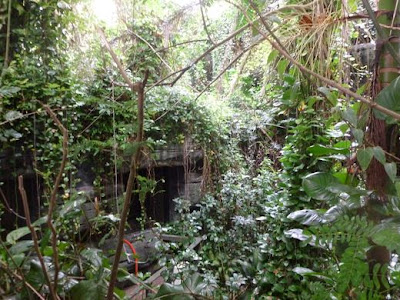 Looking back from 20 years on, I would say this was a very interesting experiment. It seems to me that it showed something like this should be possible. But it also showed that it might take a lot of fiddling with the variables to get things exactly right, and that any biosphere we send into space will need large backup reserves of air, power, and food to sustain the travelers through the learning curve.

And the Biosphere II facility has contributed at least one piece of very important science: it was proved here that high atmospheric CO2 levels cause acidification of the ocean, and that this can kill coral.

Interesting video here.
Posted by John at 7:02 AM