The South was THIS Close to Winning 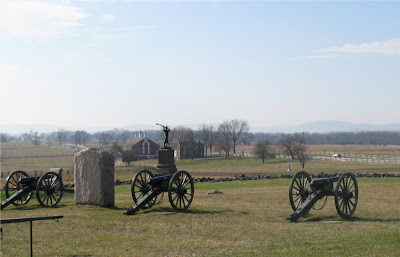 I would say, "Stop me if you've heard this before," but then you'd have to stop me. But I keep saying it because other people keep mindlessly asserting the opposite:


Allen Guelzo, director of Civil War studies at Gettysburg College, adds the Pennsylvania battle to the roster of near-misses for the South. In his new book, Gettysburg: The Last Invasion, he identifies points when Lee's army came within minutes of breaking the Union line. If it had, he believes the already demoralized Army of the Potomac "would have gone to pieces." With a victorious Southern army on the loose, threatening Northern cities, "it would have been game over for the Union."

Oh, COME ON. Where is the evidence that the Army of the Potomac was "demoralized" in July 1863? Was it, say, the bayonet charge of the 20th Maine? The self sacrifice of the 1st Minnesota, who threw themselves without hesitation into an attack that cost them 80 percent of their men? The repeated savages charges made by Custer's Michigan cavalry in the East Field? The men of the First Vermont, just weeks from the end of their service and a trip home, who marched across the front of their own guns to get a share of stopping Picket's Charge? Or perhaps the Union officer who, seeing that maneuver, shouted over and over, "Glory to God! See the Vermonters go in!" 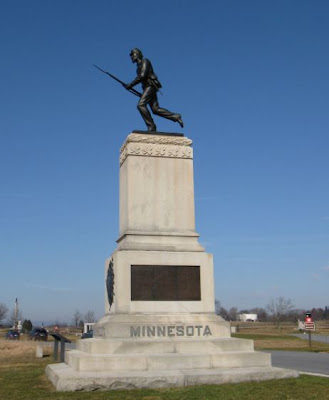 Lee thought the Army of the Potomac was demoralized after the Seven Days, so he dared them to attack him at Antietam, a mistake that cost him 2200 dead and brought his first invasion of the North to a quick and bloody end. Had Jackson not talked him out of making a foolhardy attack that McClellan was waiting for, it would have been much worse. Lee thought he could break them at Gettysburg and refused to listen to Longstreet, who knew better; this time it cost him 6,000 men killed, along with dozens of his best brigade and regimental commanders.

But even if Lee had won a great victory at Gettysburg, what difference would it have made? He had just taken 23,000 casualties and exhausted his long-range artillery ammunition; where was he going to go? After the first clumsy battles of 1861, Civil War armies were never completely routed. There were so many veteran men, experienced sergeants, and able officers that most units retained their cohesion no matter how many men they lost. Had their line been "broken," a word that conveys a fantasy of decisive action, the Union army would have retreated, regrouped, and called for reinforcements, which they could get while Lee could not. And they had plenty of ammunition.

As long as we're trading what-if scenarios, try this: Lee's army somehow grinds out a very bloody victory at Gettysburg, which leaves them holding Cemetery Ridge. Meade falls back to Little Pipe Creek in Maryland, which is where he wanted to fight in the first place and where his engineers have been preparing entrenchments. Lincoln then decides that the reinforcement he needs in Washington is U.S. Grant, fresh from the surrender of Vicksburg, and about 20,000 of his western veterans, who could be brought by railroad in two weeks. Lee is now stranded in the north, outnumbered two to one, with the man he knows full well is the Union's most dangerous commander on his heels. Does he risk his whole army by trying to take Harrisburg, or does he, in a famous phrase from another war, declare victory and get out?

Longstreet said it best: Gettysburg was "ground of no value." Lee was still in the thrall of a Napoleonic fantasy of complete victory on the battlefield, but no such victory was within his grasp. The north had too many men, too many guns, and too much money to be so easily beaten. This is the problem with that "Game Over" line. Even as a throwaway sentence in an interview, it gives the impression that the Civil War was a contest that could be won in some simple way. But how to win the war was a hard problem that the top military thinkers of the day -- Jackson, Lincoln, Jefferson Davis, Grant, Sherman -- spent a lot of time pondering. It was out of the question for either side to annihilate the other, and battlefield victories sometimes seemed to have no effect on the contest. Davis believed from the beginning that the only way the South could win was to make the price of victory so high that northerners would decide not to pay it. Lincoln shared Davis's view of the war as a contest in sacrifice, and he came to understand his own role as persuading northerners to bear the suffering that God had chosen to impose on them. Grant and Sherman settled on a sort of psychological warfare, sending Sherman's army and other, lesser forces marching across the south to make the point that the Confederacy could not defend its citizens. Sherman's mission was, not to win battles, but to avoid them if at all possible. Victory at Gettysburg, or even a successful attack on Philadelphia or Washington, would not have brought Lee any closer to the elusive goal of winning the war.

The Confederacy won a long list of great victories in the Civil War: First and Second Bull Run, the Seven Days, Chickamauga, Chancellorsville, the Wilderness, and more. The only result of these glorious triumphs was to make the eventual Union victory more thorough and complete. The notion that the Confederacy almost won the war is utter rot.
Posted by John at 7:34 AM