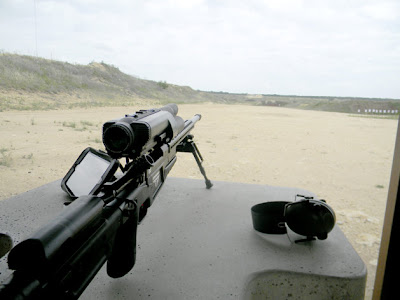 Watching science fiction movies in which people who have starships blast away with ridiculously inaccurate hand-held weapons, I have wondered when the self-aiming gun was going to arrive. Now it has:


A new company in Texas is selling a precision rifle with a unique technology that allows even an inexperienced shooter to hit a target 10 football fields away. The price tag is a staggering $27,500. Tracking Point describes the weapon as a smartgun, with a trigger wired to the scope so that the gun won't fire until it's locked on the target that's been tagged. . . .

But the weapon has some "scary implications from a security perspective," said Rommel Dionisio, a gun industry analyst for Wedbush Securities. "There are a handful of snipers who can hit a target at 1,000 yards. But now, anybody can do it," he said. "You can put some tremendous capability in the hands of just about anybody, even an untrained shooter."

Indeed, novice shooters from CNNMoney tried the gun and did hit targets 1,000 yards away. What sets the TrackingPoint rifle apart is its high-tech electronic scope that automatically accounts for distance, gravity, wind speed, humidity, the rotation of the Earth and other variables that can influence whether a bullet hits its target.

I suppose this will lead to another level of security around the President, just for starters. Interesting that the people at CNNMoney think $27,500 is a lot for a gun, when our special forces guys already use weapons that cost more than that.
Posted by John at 8:30 AM