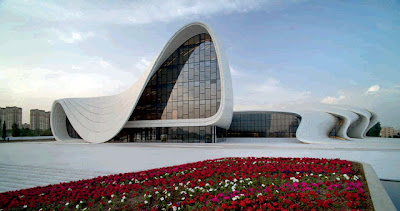 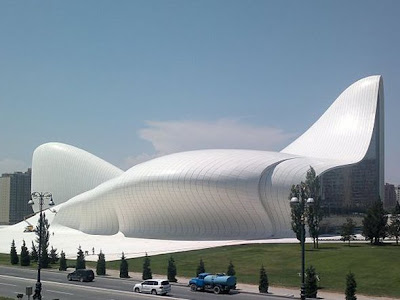 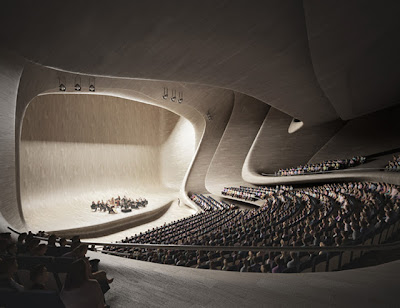 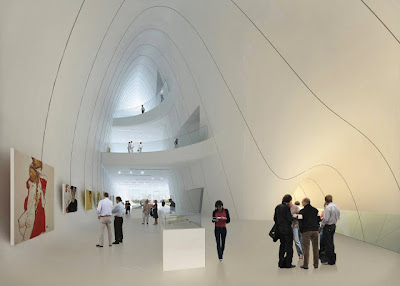 Nothing says "I am everything and you are nothing" like bulldozing a whole neighborhood to put up a gigantic, futuristic monument to yourself. 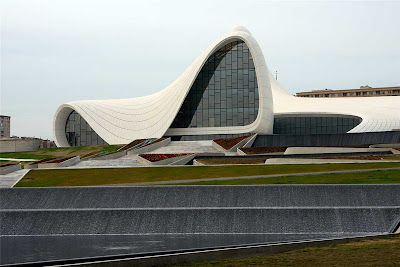 It makes me gag that this building is being featured on all the architecture sites with no political background, so here are a few choice items from wikipedia's biography of Heydar Aliyev, four-time winner of the Medal of Lenin:


As head of the KGB's branch in Azerbaijan, Aliyev ran an anti-corruption campaign as a cover for purging his opponents. Following the purge, he became the undisputed leader of Azerbaijan. During this time, Aliyev acquired wealth and prestige by developing prominent ties with the Azeri mafia. With its help, he amassed profits from the sale of various commodities, including Caspian Sea caviar . . .  In order to remain the unchallenged leader of Azerbaijan, Aliyev bribed Brezhnev with lavish gifts—such as the so-called "Sun King" diamond ring, worth an estimated 226,000 rubles. After two Moscow prosecutors investigated the Azeri mafia, one was tried and expelled from the Communist party, and the other was convicted and executed. Aliyev became a candidate (non-voting) member of the Soviet Politburo in 1976. He occupied this position until December 1982, when Yuri Andropov promoted him to the post of First Deputy Chairman of the Council of Ministers.

Aliyev was purged by Gorbachev in 1987. But after the fall of the Soviet Union he returned to Azerbaijan, reinvented himself as a nationalist, became a regional governor, flagrantly defied the central government, and fought off an attempt to depose him by force. After his enemies lost a war against Armenia, there was a coup attempt; Aliyev was called in to mediate, deposed the president and then won a fraudulent election to put himself in the job. Once installed as president he launched a truly grotesque cult of himself as Azerbaijan's combined George Washington and Lenin. Among other things he ordered that every town in Azerbaijan name a street after him. A German reporter wrote in 2003:


In his eight years of rule, the autocrat has orchestrated a true cult of personality. Pictures of leathery, sphinxlike Aliyev stare from the wall in every office across the country. The paintings with the caption "Shining Son of the People" show an amazingly rejuvenated president emitting red and yellow rays of light, while in actuality eighty-year-old Aliyev is suffering from cancer and has long since chosen his son Ilham to succeed him as president.

Before he died in 2003, he staged another fraudulent election to legitimize his son's rule. The son has decided that maintaining his father's cult is the key to insuring his own power, hence the Heydar Aliyev Cultural Center. 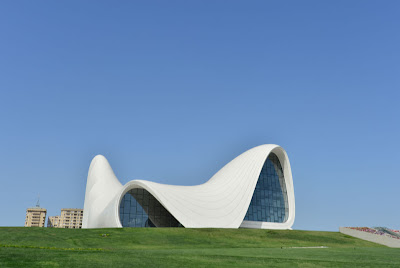 If Zaha Hadid wants to lend her talents to this mockery, I suppose that is her business. But this sad episode just reinforces the creepiness I feel toward grandiose modernism. I can't look at a building like this without feeling that somebody, somewhere, is being horribly oppressed.
Posted by John at 7:35 PM