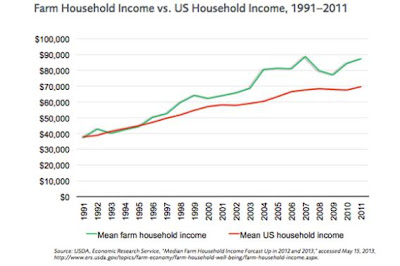 On Capitol Hill this month you get a good look at what today's Republican Party is all about. Matt Yglesias:


Take a minute if you will to savor the gory details of the farm bill the U.S. House of Representatives is passing this year. It sharply cuts the SNAP program that gives money to poor people so they can buy food but preserves ample funds to subsidize American farmers.

There's not a ton to be said about this, but suffice it to say that farmers have higher incomes than the average American while SNAP recipients have lower incomes than the average American. So basically instead of having the federal government redistribute income to the poor, the House farm bill will redistribute tax dollars to the wealthy. It's outrageous. And, broadly speaking, it points to why it's hard to take Republican complaints about government spending seriously. If the point of reducing spending on programs the GOP doesn't like is financing regressive tax cuts and regressive spending programs, then what does GOP economic policy have to offer anyone?

Not only are farm households wealthier than average, but a majority of farm support payments actually go to agribusiness corporations. But that's the Republican House, cutting payments to the poor so they can increase them to corporations and wealthy farmers.
Posted by John at 7:58 PM