Taliban Art Criticism, or, Pink Balloons as Weapons of Satan 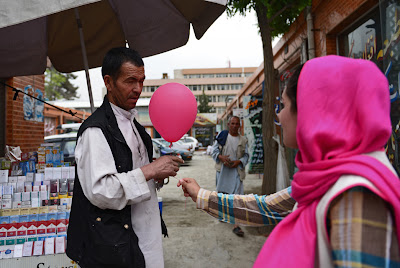 Sometimes it all makes me wonder:


The official Taliban website has published an article criticising an art project in which 10,000 pink balloons were given away for free in Kabul, saying the event encouraged un-Islamic behaviour. Under the headline "Was it a balloon show or a mini-skirt show?", the piece said that the conceptual artwork was a trick to promote Western values among the young Afghan volunteers who helped hand out the balloons. "The West is using different techniques to promote their culture in Afghanistan, sometimes they do it in an undercover way," the author, Qari Habib, wrote in Pashto in the critique published on Sunday. "Some girls were without headscarves, with tight jeans and tops on, and even with mini-skirts on the streets. The boys were also dressed in Western-style outfits. "After distributing some balloons, they wandered around Kabul aiming to break the culture of hijab."

According to the artist, Yazmany Arboleda, the balloons were about peace. Which the Taliban probably think proves their point.
Posted by John at 8:08 AM