Bronze Age Europe at the Hermitage, or, the Looted Treasures come to Light 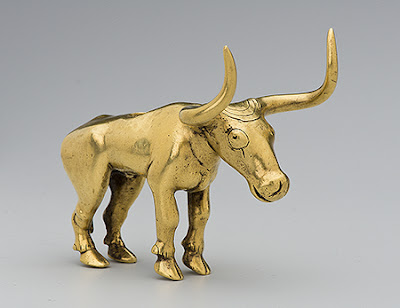 The Hermitage Museum in St. Petersburg is hosting a joint Russian-German exhibit titled The Bronze Age: Europe without Borders. This is an outgrowth of cooperation between German and Russian museums, a political move designed to smooth the tensions that date back to the looting of German museums by the Red Army. I hope something good comes of these contacts, but meanwhile it looks like a fabulous exhibit. Above, gold aurochs from the Maikop Kurgan, ca. 2500 BCE. 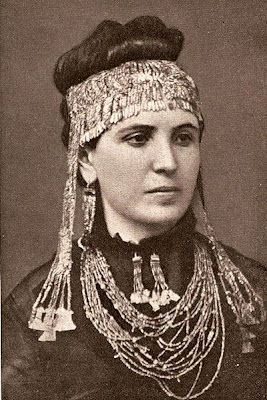 When the fighting died down in the summer of 1945, German museum officials discovered that many of their most famous objects were missing. The Soviets always denied having taken them, but Boris Yeltsin finally owned up to having Priam's Treasure in 1992. I always thought it was typical of the Soviets that rather than displaying or selling the loot --above is a famous picture of Heinrich Schliemann's wife wearing part of the golden treasure -- they hid it in warehouses. The Russians have so far refused to return any of this stuff, saying they are keeping it as compensation for the destruction Russia suffered during the war. 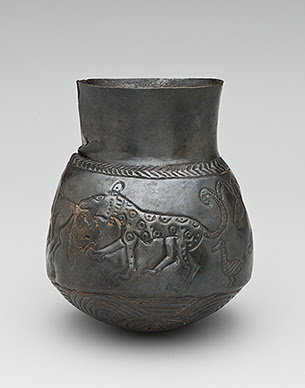 Silver vessel from the Maikop Kurgan. 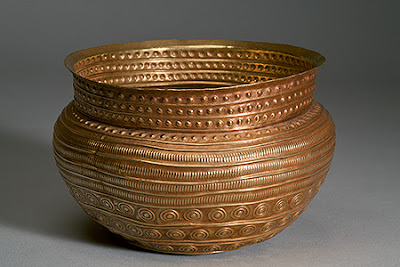 Gold bowl from the Eberswalde Treasure, 800-1000 BCE. The 81 items of the Eberswalde treasure are some of the most famous of the looted items. In 2004 they were found by a reporter from Der Spiegel in a locked vault at the Pushkin museum. 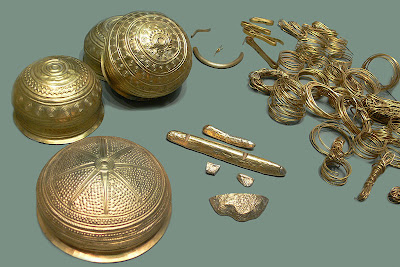 Copies of the Eberswalde Horde that have been displayed in Berlin. 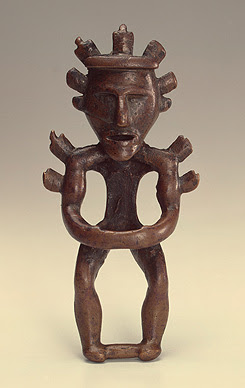 The exhibit is a mixture of stuff looted from Germany and stuff excavated in Russia, and I supposed the point is that when it travels to Germany next year it will represent a homecoming of sorts for the looted items, and an apology in the form of the spectacular Russian finds. A good step toward resolution, I would say. Above is a figurine from the Gallich Treasure, a mysterious horde of objects from European Russia turned up by workers repairing a mill dam in 1836. Although they were found in Europe, they resemble artifacts used by the cultures of Central Asia around 1500 BCE.
Posted by John at 6:55 AM