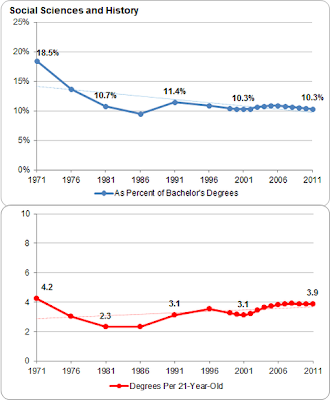 The percentage of American college students who study the humanities and liberals keeps declining. But this much lamented decline is mostly explained by the increasing share of people attending college. The table above, comparing degrees in history, sociology and political science as a percentage of all degrees and as a percentage of all young people, is typical of the graphs produced by Nate Silver of 538 in his study of the problem. What has changed is not so much the appeal of the liberal arts to the sort of people who have went to college in 1970, as the kind of person who goes to college. More people now go to college, and the new entrants in the system generally have little interest in liberal education: they want good jobs, not intellectual enrichment.

Trying to force a humanistic education on these people is not likely to make much impact on them, unless it drives them out of higher education altogether. If you ask me, these numbers are more evidence that we should drastically shrink the number of four-year colleges and divert half or more of college students into career preparatory courses in community colleges.
Posted by John at 6:40 AM