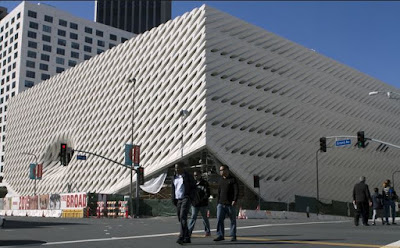 Eli and Edythe Broad are billionaires (he builds houses) who collect art. Since their billion-dollar collection long ago outgrew even their array of homes, they decided to build their own museum in Los Angeles. Like the robber barons of old, or J. Paul Getty, they wish to leave their own mark on the world of art. Allow me to mark the opening of this horror by setting aside all my attempts to be positive about the world and letting out a scream of protest. 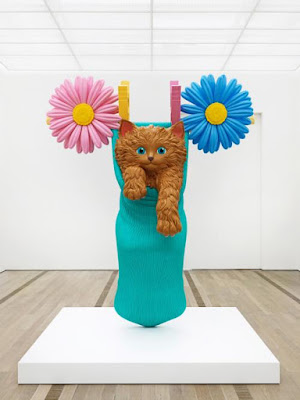 Ok, fine, the Broads (they pronounce the name Brode, should you be trapped in a conversation about them) have their taste, I have mine. Whatever. But the sort of crap they collect and are foisting on the public sums up everything I hate about contemporary art. We are talking about the people with the world's largest private collection of works by Jeff Koons, including the masterpiece above. I am going to lay my cards on the table now and take a bold stand: art should be something more than a lame joke. 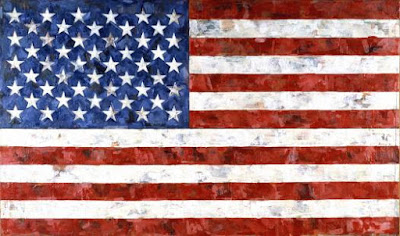 The Broads started collecting around 1980, and they have mainly focused on new work. They have reached back in time to acquire some works by big name artists, but their taste in mid century art is just as awful as their taste in contemporary work. They have 42 works by Jasper Johns (above), 28 by Andy Warhol (including a soup can, of course) 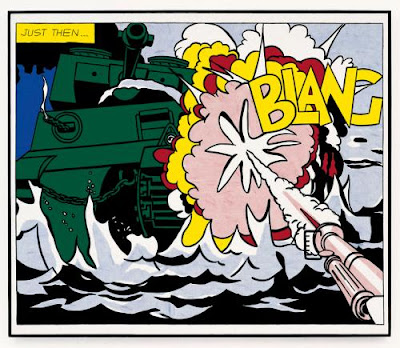 and 34 by Roy Lichtenstein (above), but none by Mark Rothko, Helen Frankenthaler or Clyfford Still. 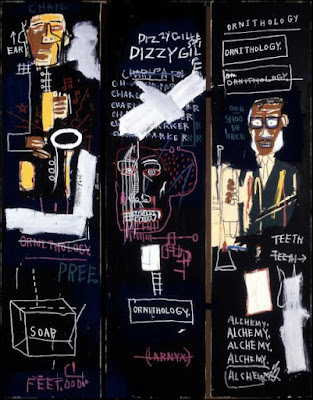 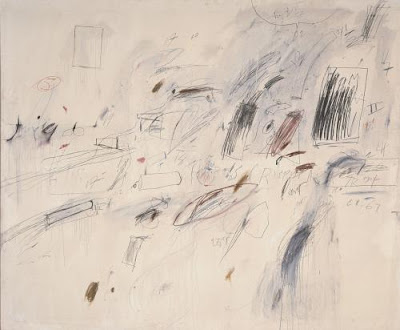 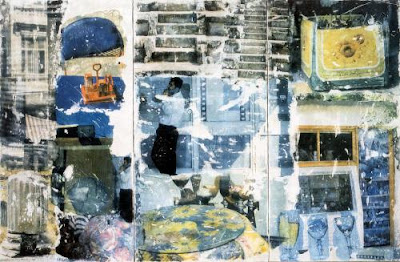 or Robert Rauschenberg. Nothing by David Hockney or any of the other contemporary painters I love. 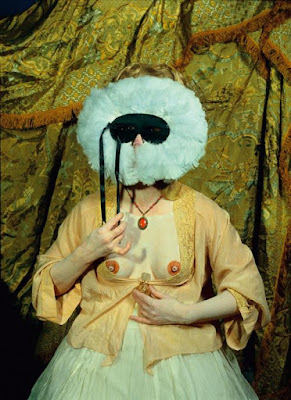 They have lots of clever photographs by people like Chuck Close, Gregory Crewdson and Cindy Sherman (above), none by any of the amazing photographers who make beautiful pictures of the world: Sebastião Salgado, Frans Lanting, Steve McCurry, Orsolya Haarberg, Hiroshi Sugimoto. 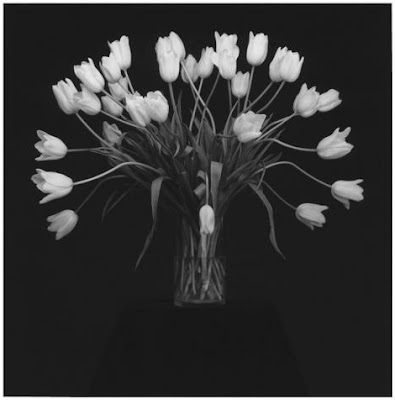 (They do have some nice flower pictures by Robert Mapplethorpe, who also did portraits of both Broads.) 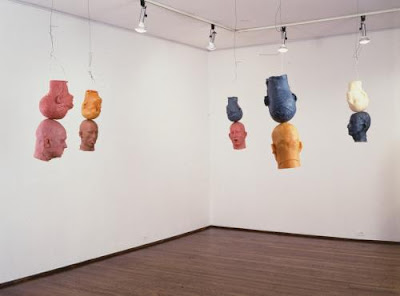 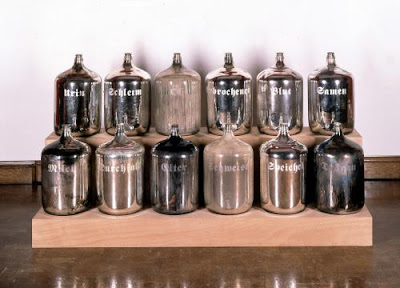 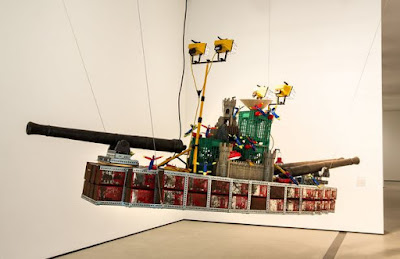 and David Burden. Nothing by Andy Goldsworthy, Marc Perez, Kay Sekimachi, Santiago Caltrava, or Peter Callesen. And if you want strange, junky art, why not Kris Kuksi? 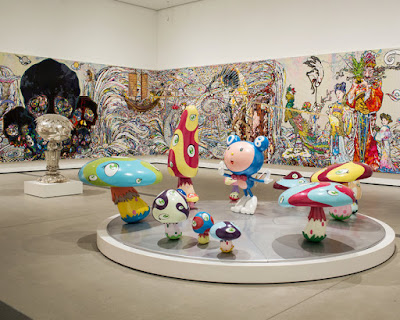 The Broads focused mainly on American art, with some British, although they do have 13 works by Anselm Kiefer. The only African artist represented is El Anatsui; there are, you know, other artists in Africa. How about Julien Sinzogan or Elias Sime? Instead they have Japanese pop culture crap by Takashi Murakami (above). 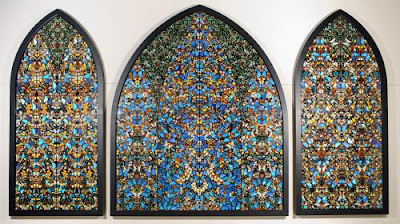 The Broads like art that is cool, with it, in the know, clever, wry, ironic. And that, it seems to me, is the sort of art that mainly dominates the contemporary art scene. Yes, there are spiritually serious artists in the top rank, notably Kiefer. And even the Broad has a few works that are beautiful, like one of Damien Hirst's butterfly windows. But in the main they shun anything that seems deep or beautiful. That, they seem to feel, is boring; if I had to express in a few words the principle on which this collection is based, it would be a terror of boredom. There must be noise, excitement, words, colors, a whole Times Square of distractions: anything but simple contemplation, simple appreciation of something lovely or arrestingly strange. 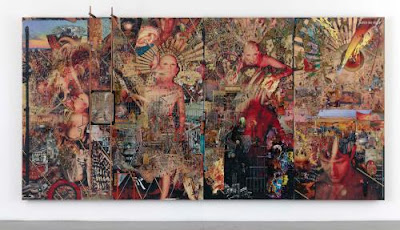 Is that the best we can do? Instead of the Gothic world's sacred architectonics, or the heroic self assertion of the Renaissance, all we have is attention deficit syndrome? Not only is this sick, it isn't even true. There is wonderful, beautiful art being made all over the world, art with spiritual intensity, demonic fervor, meditative grace, amazing beauty, eye-opening vision, political rage, a vast range of emotions all but missing from the Broad's glitzy array of expensive crap. Could we please have a museum devoted to beauty, wonder, and terror, not another temple of noise?
Posted by John at 8:54 PM

Okay, we get it. You REALLY don't like contemporary art.

Most comteporary art does very little for me - and yet, life goes on. I'm probably never going to visit the Broad museum, nor care for nor appreciate any part of the collection it houses. But someone somewhere absolutely will, and were the tables turned I would absolutely want to have the freedom and the opportunity to see and appreciate the art of my choice that they are being granted to enjoy.

I can't find anything to fault with the Broads creating this museum. It's absurd and petty to criticize them in terms of their choice of taste, since taste is entirely subjective. Beyond that, having art in a museum accessible to the public is infinitely preferable to having it hidden away in some private collection - no matter whether I personally like that art or not.

What exactly is your deeper point or argument with all this? Or did you write out a 4000 word post just to repeatedly and passionately insult other people's sense of taste simply because it doesn't match your own?

I love contemporary art; I linked in that post to a dozen contemporary artists I admire. The Broad Museum does not represent anything like the range and depth of art being made in the world today. Do you object to the whole apparatus of criticism? Because expressing positive and negative opinions about art has been a mainstay of culture since Confucius and Plato.

I don't have any particular beef with the Broads; it's their collection, and it's nice that they want to share it with the public. But it bothers me a great deal that so much of the contemporary art scene is dominated, as I see it, by spiritually vacuous glitz produced by clowns like Jeff Koons. Some of the artists I have in mind (e.g., Andy Warhol) would happily own up to producing spiritually vacuous glitz.

Art is a very tough profession; there is savage competition among artists for the available money and attention. If I can shift the art world a tiny bit, and redirect even one dollar away from impressarios like Koons and toward any of the dozens of contemporary artists I admire, I would consider that a deed well done.