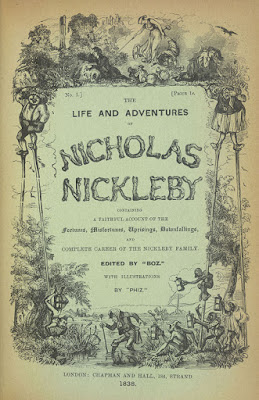 My working life divides pretty neatly into two parts, office and field. When I am in the office I spend 90 minutes every day on the train, and I read. When I am in the field I spend at least that much time and sometimes hours more in my car, and I listen to recorded books. Some of the best time I have had commuting in my car has come from listening to Simon Vance read Charles Dickens.

I tried to read Dickens at several points in my life, but the only one of his books that I ever really enjoyed was The Pickwick Papers. I think the only ones I finished were that and Great Expectations.

But since I started listening to Dickens I have enjoyed and finished David Copperfield, Oliver Twist and Bleak House, and just now I an nearly finished The Life and Adventures of Nicholas Nickleby. I vastly prefer hearing these books to reading them. For one thing, some of the best parts are comic conversations, and everybody knows that the right intonation and timing can make or ruin a joke. For another, Dickens liked to write in dialect, which I hate reading. But with a reader who understands the accents and can bring them to life, these passages become verbal music.

The David Copperfield and Nicholas Nickleby I listened to were recorded by Simon Vance, one of the leading audio performers in the world. He is wonderful. He has thought as hard about how the characters should sound as Dickens did about their names, and I love the voices he gives to all the main players. His Mrs. Nickleby is one of the greatest comic characters I have ever encountered in a book. He can also read a thick Yorkshire accent in a way that is completely convincing but also perfectly understandable at 70 mph. If you can find his versions, get them.

Dickens is not one of my favorite writers. His plots are silly and moralistic, and his theory of the world seems to be that everyone is either good or bad, and all our problems arise from badness. He was remarkably ignorant about many parts of his own world, especially business and politics. (What, exactly, did Scrooge do? What was made in Gradgrind's factories? What fills the Cheerybles' warehouse?) As George Orwell complained, he seems to think that the only problem with capitalism is that capitalists are not nice enough, and his books are full of rich men like the Cheerybles, or Scrooge after his transformation, who trot around giving away money and patting sweet tykes on the head. Which is nice, but as a theory of social change it leaves a lot to be desired. His ideas about love and marriage (in his books, anyway) are solidly bourgeois and Victorian. What I enjoy about Dickens is the many comic scenes and brief descriptions of people, places, and events. This is why I liked The Pickwick Papers so much; it is really just a series of amusing episodes with no overarching plot at all. (The description of the duel may be my favorite comic scene ever, in any medium.) I also enjoy being reminded that in other times and places, people spoke and acted differently. And since the plot is of no real importance, it doesn't really matter if something on the road distracts you and you miss a few lines.

As I head back down to Virginia tomorrow, I will be listening to the melodrama of Nicholas Nickleby's family, and enjoying myself very much.
Posted by John at 8:21 PM

I like Dickens for his satire, comic exaggeration, and comic grotesque. In Chapter 10, Little Dorritt, his pillorying of the Circumlocution (Patent) Office, is a classic. And he created fascinating secondary characters -- the Smallwoods, Jo, and Caddy in Bleak House, alone. Yes, his characters are simplistic in that they are either all good or all bad, but such characters lend themselves to comic exaggeration. I've never understood the criticisms of this, since this is very much what he intended. I suspect he would have been a much different writer if he had created complex characters, something I have no doubt he was quite capable of doing. I sometimes think we sorely miss a Dickens right here and now.

Thanks for the recommendation on Vance. I'll listen to one of them.