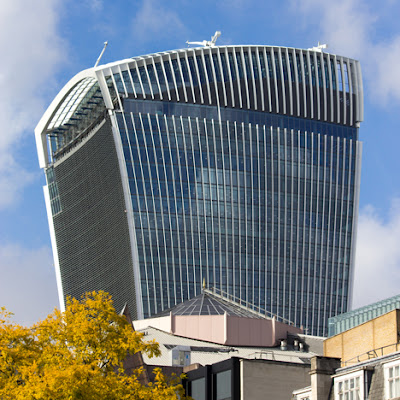 This truly ghastly building, 20 Fenchurch Street by Rafael Viñoly, has won this year's Carbuncle Cup for the ugliest new building in Britain. The Guardian called it a "thuggish comedy villain of a building." Critic Owen Hatherley compared it to an equally horrible building in Paris:


What do the Tour Montparnasse in Paris, designed and built in the early 1970s by a large, anonymous committee headed by Eugene Beaudouin, and 20 Fenchurch Street – also known as the Walkie Talkie – by (and very much by) Rafael Viñoly have in common?

The most obvious answer would be "they're both massive, horrible and unavoidable", but they're also cousins in causing people to wish for their destruction almost immediately after construction.

One member of the committee that awarded the Carbuncle Cup, Ike Ijeh, called the Walkie Talkie "a gratuitous glass gargoyle graffitied onto the skyline of London," and concluded, "It should never have been built." Another, Eleanor Jolliffe, described it as a "Bond villain tower, as it could melt your car with a solar beam from space". 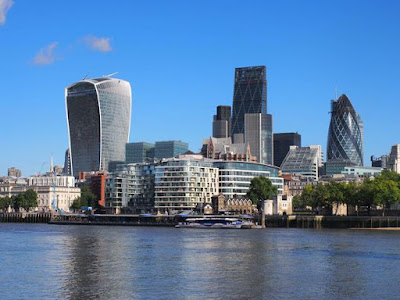 That last bit is a reference to an unexpected effect created by the building's curved facade:


Claims surfaced over the weekend that the glare from the curvaceous glass facade of the 37-storey tower - currently under construction at 20 Fenchurch Street - have caused vehicle paintwork to melt and bodywork to distort.

Engineer Eddie Cannon, who parked his Vauxhall Vevaro beneath the building, told local newspaper City AM: "The van looks a total mess – every bit of plastic on the left hand side and everything on the dashboard has melted, including a bottle of Lucozade that looks like it has been baked."

This led to the addition of fins designed to break up the light beam to the facade, and this seems to have made the problem more manageable. 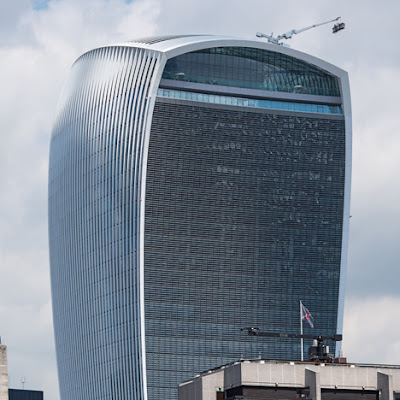 But now there are claims that the building creates particularly strong wind gusts, which are a common problem around very tall buildings, but in this case are said to be knocking people down. 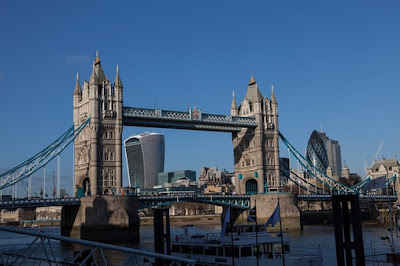 So, it's ugly and a menace on multiple levels. The Guardian:


Responsible for a catalogue of catastrophes, it is hard to imagine a building causing more damage if it tried. It stands at 20 Fenchurch Street, way outside the city’s planned “cluster” of high-rise towers, on a site never intended for a tall building. It looms thuggishly over its low-rise neighbours like a broad-shouldered banker in a cheap pinstriped suit. And it gets fatter as it rises, to make bigger floors at the more lucrative upper levels, forming a literal diagram of greed.

And yet it was built, and now London is stuck with it.
Posted by John at 12:59 PM

It astounds me the degree to which people will get so hysterically up in arms over a single high rise tower, while simultaneously being utterly willing to allow themselves to be constantly bombarded by advertisements on every spare physical surface and in every media broadcast around them.

How is this building any more of an eyesore than the untold numbers of billboards, posters, building exteriors, and even vehicles all plastered with corporate logos and branding trying to exploit our cognitive failings and prey upon our insecurities to sell us junk we don't really need? Why does one kind of invasion of public space by commercial interests drive people into a frenzy, while the other barely even registers on a conscious level?

"But this building is just so ugly!" Clearly that's a subjective opinion, and someone out there clearly holds the opposite view because no one would invest millions of dollars on a building they think looks hideous. Why should one person's opinion matter any more or less than another person's? Who decides whose opinion gets to count or not?

"But this building causes strange side effects of its construction and placement!" All skyscrapers and other large structures do. If you're going to complain about these sorts of problems, then you can't just cherry pick only the specific structures you personally dislike - you have to level your complaint against all such buildings as a whole.

"But this building ruins the traditional skyline / character of the city! It clashes with the historic appearance we've all grown to know and love!" So did every major new construction at first. At one point, all the major beloved landmarks of a city stuck out from the rest of it because of their novelty and prominence. There were people who mocked the Empire State Building when it first opened - it was frequently derided as looking like a giant pencil - and yet today people can scarcely imagine New York City without it.

If one was to argue against the construction of any and all skyscrapers whatsoever, I could understand that. But so long as we all collectively agree to allow any such buildings to exist, we must also understand that they're not all going to look the same, and that different people are going to have different opinions about whether they like the looks of different buildings.

Tolerating the buildings which you in particular find ugly is just the cost of doing business, and it is something to be expected of everyone, regardless of their own tastes. There must certainly be buildings which you like the appearance of which are deeply hated by others. And yet we'd think it rude and presumptuous of them to gripe and groan about them, or worse yet, try to prevent their construction or arrange for their removal.

Living in a democratic society means making certain compromises and possessing tolerances for things we as individuals might not like or agree with, and grumbling sourly about them to no real end is neither constructive nor rational.

It's a hideous building. G. Verloren--I really, really have wondered over the years why you haven't started your own darn blog and laid off with the incessant commenting here.

It's one thing to provide counterpoint to a blogger's materials. It's another to monologue time and time again, and so seldom to the point.

P.S. I think John has been really, really patient with you, and suspect he will continue to be so in the future. But as one of John's irregular regular readers--so much of the time I wish you would just shut up. I'm so tired of clicking through to see how someone has commented--only to see it's just you again. It's not just the *way* you comment. It's the way you comment seems exquisitely designed to shut down all discussion.