Franz Xaver Winterhalter: the Master of Women in Dresses 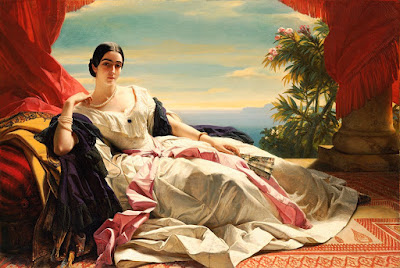 Franz Xaver Winterhalter (1805-1873) was the most stylish and sought-after court painter in an era of when royal women wore truly sumptuous clothes. Thus his many female portraits are as much of dresses and jewels as they are of women, and when you see one of his paintings online the face has often been cropped out, leaving only the dress. Today the Getty had the painting above on their Tumblr, but they did not reproduce the whole thing. (Leonilla, Princess of Sayn-Wittgenstein-Sayn, 1843). 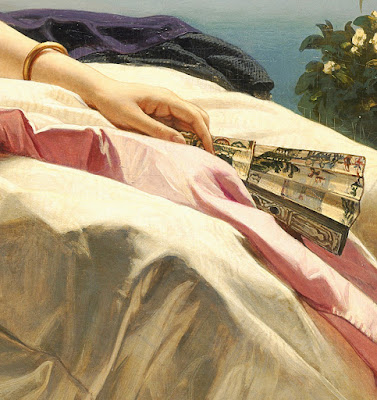 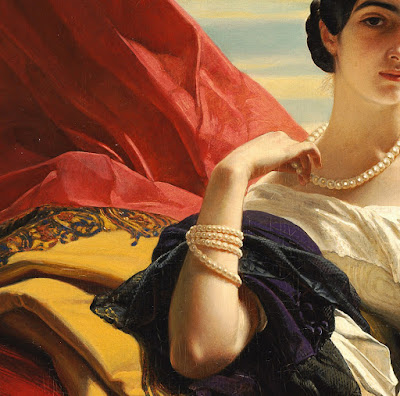 Instead they show these details, emphasizing Winterhalter's magnificent treatment of fabric. An interesting fate for a man who once burned to be one of the leading artists of his age. 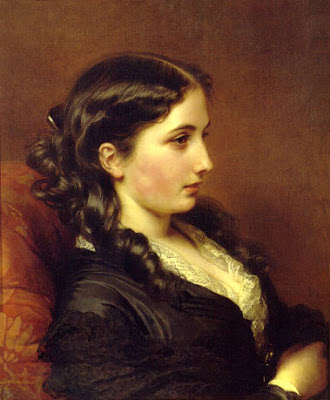 Winterhalter was born in the Black Forest to a family of well-off peasants, the sixth of eight children, four of whom died in infancy. Strange background for a court painter. He attended a monastic school, where some art-loving monk must have noticed and encouraged his talent. He left school at 13 and entered the first of a series of apprenticeships with artists and printmakers in southern Germany. Until he was 28 he supported himself mainly as a lithographer. (Study of a Girl in Profile.) 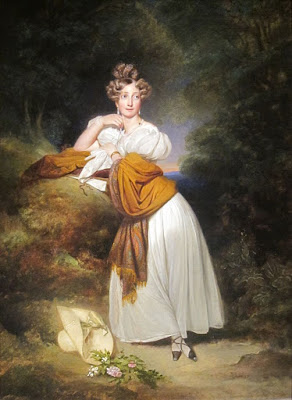 Winterhalter had his first close association with royalty in 1828, when he became drawing master to Sophie Margravine of Baden (above, a portrait of 1830). 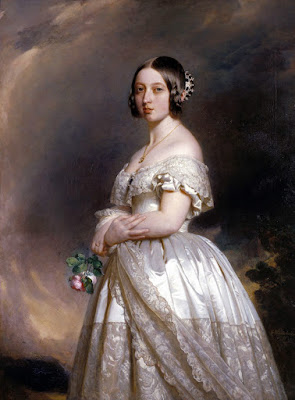 From then on Winterhalter's reputation spread among European royals, especially after he moved to Paris in 1836. He painted Queen Victoria for the first time in 1842; he eventually did 120 paintings for her, mostly portraits of her and her family. This number gives you some idea of the number of portraits he painted, since Victoria was not even his top client.

Famous image of Victoria in 1843, which used to be the banner at the web site of Britain's National Portrait Gallery. 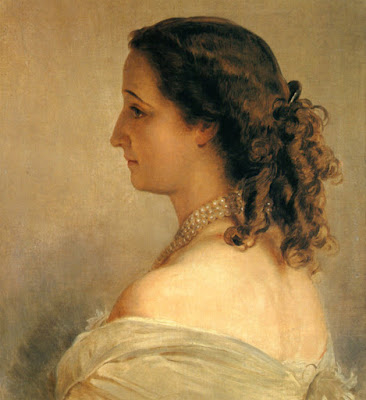 Winterhalter's most generous patrons were Emperor Napoleon II and Empress Eugénie of France, shown above in a portrait of 1861. 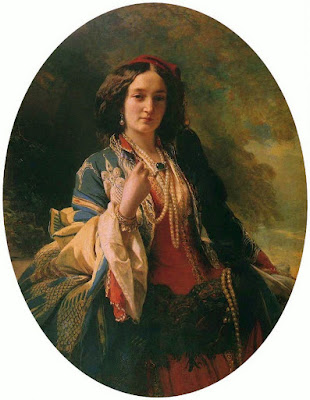 Once he had the patronage of France's rulers, the orders flooded in. Winterhalter was not entirely happy about this. He did not mind painting portraits, which was how most painters of his era paid the bills. But his real ambition was to do the sort of academic scenes (historical, mythological) that got top placement in the salons and earned their creators critical acclaim. What was he to do, though? It was devilish difficult to refuse requests from all these sovereigns and mighty duchesses, some of whom demanded to be painted again and again. (Countess Katarzyna Potocka, 1854) 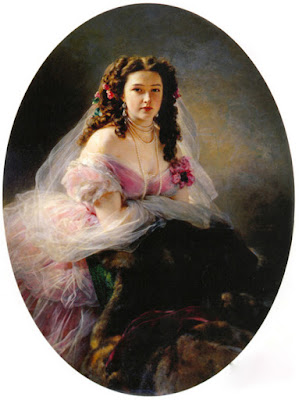 He said yes and endured the trials of being a wealthy celebrity artist, getting ever richer while his critical reputation steadily sank. "Not serious," said the masters of the art world. "Oh duchess, you look magnificent!" said Winterhalter, as some chamberlain filled his pockets with gold. (Madame Barbe de Rimsky-Korsakov, 1857) 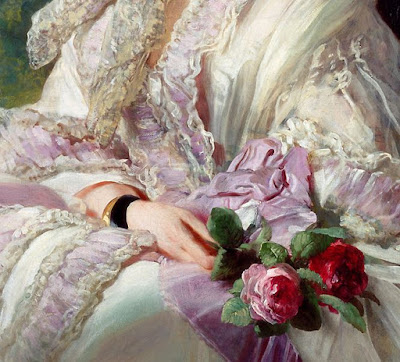 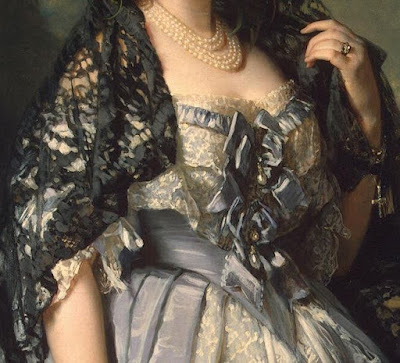 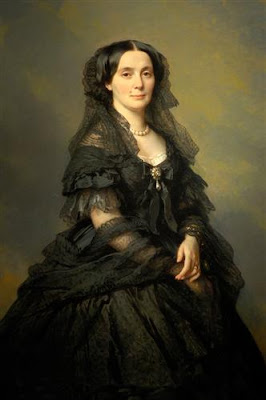 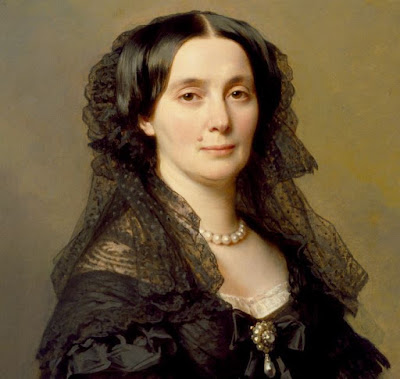 Mourning was no bar to wearing fabulous clothes, as long as they were black. (Princess Kotschoubey, 1860) 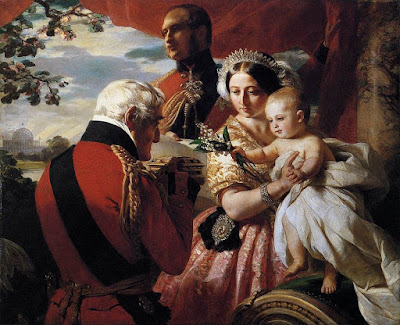 For variety, here is a fascinating painting of Queen Victoria and her family: The First of May, 1851. This painting celebrated the first birthday of Prince Arthur, the 82nd birthday of his godfather the Duke of Wellington, and the opening of the Crystal Palace Exhibition (in the background). The arrangement is modeled on paintings of the Three Magi presenting their gifts to Jesus; poor Prince Albert looks about as involved as Joseph usually does. 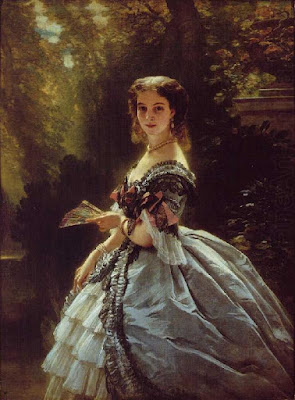 Princess Elizaveta Esperovna Troubetzkaya, 1859. As with many other Victorians, Winterhalter's reputation sank when the Impressionists took the art world by storm and by 1900 his paintings were disappearing from museum walls. Now they are back. 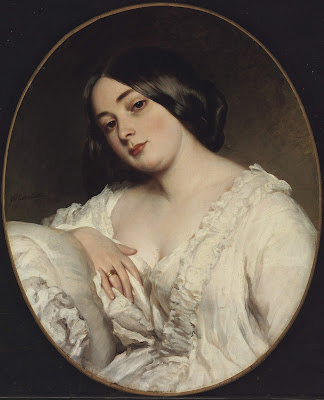 An unknown lady, painted around 1860. 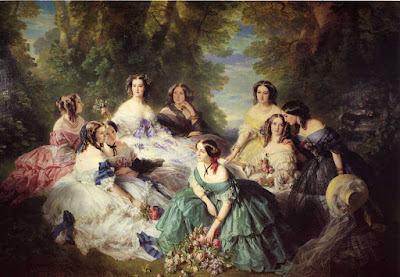 And finally the work that some consider Winterhalter's masterpiece, Empress Eugénie Surrounded by her Ladies in Waiting, 1855. Nine dresses in one painting! But what dresses they are, and what women.
Posted by John at 7:48 AM