The Skeleton and the Tree 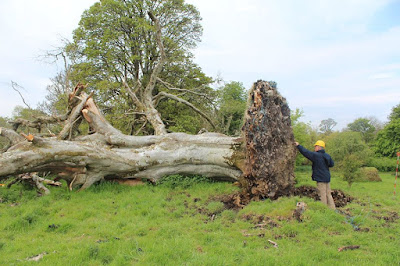 Archaeologists like tree-throws; I have found several sites by inspecting the soil clinging to the roots of downed trees, and one of the best sites I have worked on was found because of a tree throw that boasted three stone spear points and a large, decorated potsherd. But I never found a tree throw like this:


Interesting news from Collooney in Co. Sligo where archaeologists working for Sligo-Leitrim Archaeological Services (on behalf of the National Monuments Service) have discovered an early medieval skeleton in unusual circumstances. The body was identified earlier this year beneath a 200 year old beech tree that had blown down during a storm. Slightly bizarrely, the upper part of the skeleton was found raised in the air, within the tree’s up-turned root system, while the legs were still in the ground. 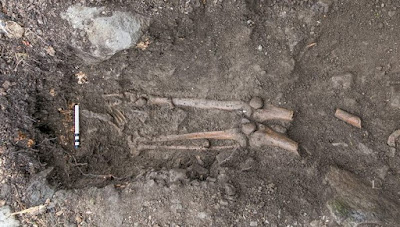 The skeleton was of a young man who died by violence some time between 1030 and 1200 CE.

From the Irish Archaeology Blog.
Posted by John at 7:48 AM