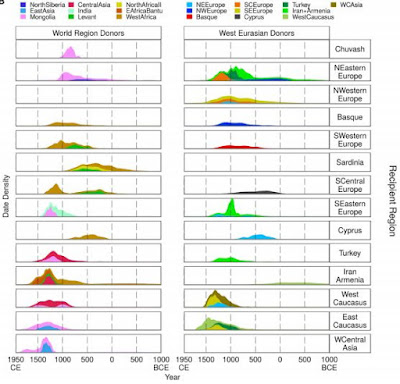 A new article in Current Biology by George Busby et al. purports to show a lot of comparatively recent genetic mixing among the populations of Europe and West Asia. (This is a completely different phenomenon from the great ancient invasions I have written about before.) Some of the data they present makes sense; for example, you can see a minor flow of genes from northwestern Europe (Franks) into the Basque population around the year 1000, and a significant flow of genes from central Asia into Turkey between 1000 and 1500. They identify the entry of Slavs into southeastern Europe via two clusters of genes, one similar to modern Lithuanians and the other to modern Germans, that entered between 700 and 1200. Everybody invaded the west Caucasus.

But what is one to make of the supposed flow of "southern Italian-like" genes into Britain between 500 and 1000 AD? Or of genes from "Armenian-like sources" into Orkney? Or Mordovian (relatives of the Hungarians) genes into Norway? Of "Cypriot-like" genes into northern Italy?

I think there is something wrong with their statistics, but I don't really understand their methods well enough to say what. One issue is that they rely on randomly sampled modern populations to generate their base lines, rather than trying to identify people who have resided in a particular area for generations. Another is that particular historical events may confuse the notion of where genes "originate." Surely the "southern Italian-like" genes they identify in Britain and Orkney are more likely to be Viking genes carried to southern Italy by Normans in the 11th century and later; I wouldn't have thought that the Norman conquest of southern Italy and Sicily involved enough people to leave a clear genetic signature, but who knows? I can't think of any other explanation.

What I really believe is that there has been so much mixing of populations across west Asia over the past 2000 years that it will be all but impossible to tease out the actual percentages of genes that Group A contributed to Region B at any particular time. But the data do show lots of mixing; there is no population in Europe or West Asia, not even the Basques or Norwegians, that seems to have remained "pure" since classical times.
Posted by John at 8:35 AM

"But what is one to make of the supposed flow of "southern Italian-like" genes into Britain between 500 and 1000 AD? Or of genes from "Armenian-like sources" into Orkney? Or Mordovian (relatives of the Hungarians) genes into Norway? Of "Cypriot-like" genes into northern Italy?"

Wouldn't the obvious answer simply be trade? These are all Mediterranean genes being brought north. And while 500 CE might seem a tad early in some regards, 1000 CE hardly would be - especially for such small distances as those between Cyprus and Northern Italy. The Venetians famously smuggled the body of St. Mark out of Alexandria in the mid 800s, for example.

Is it really so hard to imagine that enterprising merchants from the Mediterrean regularly sold valuable goods as far north as Orkney and lower Norway? Particularly in an age when even a weakened Byzantium was still the major European entry point for exotic goods which would eventually wind up in cities like London, and while The Holy Roman Empire as well as ascendant, stretching uninterrupted from the shores of the Adriatic all the way to the North Sea and the Baltic?

And knowing as we do that such trade existed, surely it isn't a stretch to consider the promiscuity of sailors, who even if they didn't personally resettle in northern lands would still manage to spread their genes while on shore leave? You might think they would lack the numbers to influence gene pools substantially, but sailing employs many hands, and population levels were comparatively small in these regions at this time period. Over many years of steady trade, that can add up.

Between 500 and 1000 CE, Paris only ever had between 20,000 and 30,000 citizens, while London during the same time had about half that. Already those numbers are within a reasonable range for genetic influence, and they're the largest population centers around.

Consider, then, other smaller ports of call along the shores of the region. You don't have to go all the way to Orkney to find trade worthy cities with populations of only a few thousand at best. And if you do go all the way to Orkney, you'll find even smaller numbers there. Even the largest settlements in southern Norway in this time period barely broke 5,000 people. A ship of only a couple dozen Balkan traders could certainly make a detectable impact there, while also making a good profit from regular journeys every few years or so.