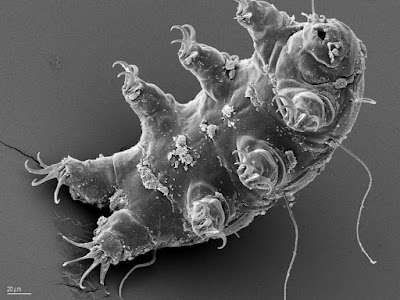 Tardigrades are one of the wonders of nature that everyone interested in science discovers eventually. They are wonderful in many ways: they have been around for 530 million years, surviving all the mass extinctions that wiped out so many larger and more impressive creatures. They look enough like larger animals to have the nickname water bears, but weird enough to have an alien look. Alien bears. 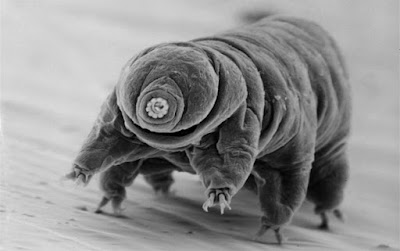 And they are very hard to kill:


Confronted with drying, rapid temperature changes, changes in water salinity or other problems, tardigrades can curtail their metabolism to 0.01 percent of normal, entering a kind of suspended animation in which they lose the vast, vast, vast majority of their body water. They curl up into something called a “tun.”

Tuns can be subjected to atmospheric pressure 600 times that of the surface of Earth, and they will bounce right back. They can be chilled to more than 300 degrees Fahrenheit below zero for more than a year, no problem. The European Space Agency once sent tuns into space: Two-thirds survived simultaneous exposure to solar radiation and the vacuum of space.

Without water, “the damaging effects of freezing cannot happen,” Dr. Siddall explained. “It protects against heat because the water inside cannot turn into a gas that expands.” Even radiation needs water to do damage, he said. When cosmic radiation hits water in a cell, it produces a highly reactive form of oxygen that damages cell DNA. The tun doesn’t have this problem. 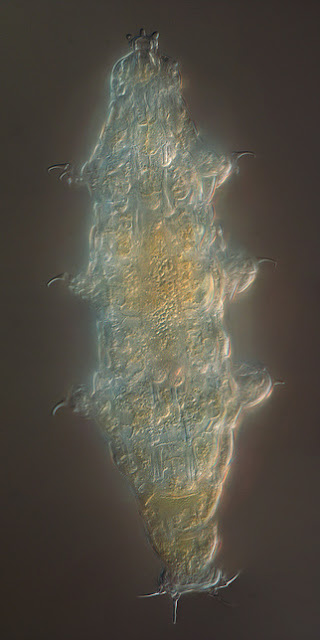 Right now tardigrades are hot, the stars of a new show on extremophile organisms at the American Museum of Natural History, subject of several blogs, and so on. They are tiny, half a millimeter or so long -- you can see them with the naked eye, but barely -- but very common and easy to find. There are societies of people who hunt for them and share pictures. 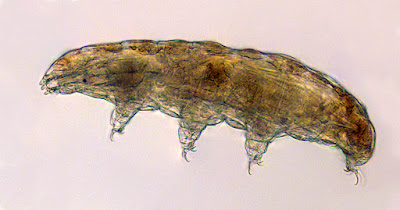 Some people even think they came from outer space, but although they might survive a crossing of interplanetary space that seems silly to me; they look weird, but biochemically they are identical to all other earth-based eukaryotic life. Our little home-grown aliens.
Posted by John at 7:03 AM