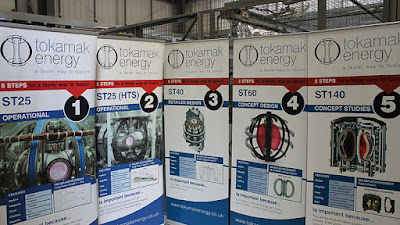 I already wrote about Lockheed's plan for a mini fusion reactor, and lately I have seen other schemes popping up in the science news. The latest is from Tokamak Energy, a privately funded startup company setting up shop near London. Tokamak Energy was founded by scientists from the nearby, government-run Culham Centre laboratory, a major fusion endeavor, so these are not crazies from the woods any more than Lockheed's engineers are.

I wonder, what is driving all of this? The people involved say it is new science, for example new calculations that show the potential efficiency of fusion reactors is independent of the size. This means that research can progress on washing-machine-sized reactors that are vastly cheaper and quicker to build than the giant machines in government labs. But that doesn't necessarily mean that small reactors will work; after all, the giant machines still don't work, either, so just scaling them down doesn't solve the many problems.

Is this just the same old fusion mania, with the added excitement of being able to work on a small machine with a staff of a dozen, instead of in a giant bureaucracy? Or do these people understand something new about fusion that the rest of the world does not?
Posted by John at 11:35 AM

There is, of course, an important distinction to be made between cold fusion and thermonuclear fusion.

Cold fusion simply doesn't work at all - physics as we understand it precludes the possibility. But thermonuclear fusion is something we've achieved in uncontrolled form already, via the "hydrogen bomb", and which we could theoretically turn into a power source if only we can properly contain and control the process.

What we lack is a proper means of supplying a containing force. Stars have their immense gravity and pressure, but we have to rely on other methods. The three big ones I'm aware of our having tried are magnetic, ionic / electrostatic, and inertial.

It's possible that a smaller scale reactor design may help eliminate the problems we face with one or more of these methods. It's also possible that there have been recent advances in one or more of these methods that are making fusion reactors appear more feasible as of late. (From what I'm reading in the articles you link, it appears they're focusing on magnetic containment, which I believe has been the most successful method so far?)

The trick, ultimately, is efficiency. We can get the fusion itself to occur, we just can't yet contain it in a way that doesn't either take more energy than is produced, or hamper our capacity to put the energy produced toward useful work. If working at a smaller scale makes it easier to contain the reaction, and if the theorists are correct about output efficiency being independent of reactor size, then maybe we'll get somewhere.

I'm not expecting much, though. Seems like a bit of a longshot overall.