Margalit Fox, The Riddle of the Labyrinth 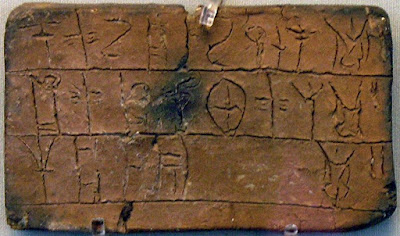 Margalit Fox is a journalist with no special knowledge of archaeology or linguistics, but she has managed to write a pretty good book about the decipherment of Linear B. The Riddle of the Labyrinth (2013) tells the whole story but focuses on the contributions of American classicist Alice Kober, who did a lot of the grinding preparatory work that allowed Michael Ventris to achieve his breakthrough of 1952. 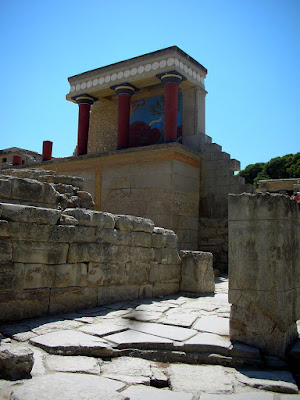 Bits of writing began to turn up as soon as archaeologists began poking into Mycenaean sites in Greece, in the 1870s. But these early inscriptions were so brief that some questioned whether they were writing at all. One of the believers was Heinrich Schliemann, which probably did not help persuade skeptics. Another was English archaeologist Arthur Evans. Evans, backed by a large personal fortune, set about collecting gemstone seals with such writing on them in the antiquities markets of Athens. The dealers told him that the best such seals came from Crete, so off to Crete Evans went.

In 1900 Evans began excavating at Knossos, the most famous pre-classical site on the island. Almost immediately, his excavators began to find tablets bearing ancient script. Within a few years Evans had hundreds of tablets, and three different writing systems: one that looked like ideograms or hieroglyphs (above), and two similar but nonetheless distinct systems of signs that Evans called Linear A and Linear B. Linear B was much the more common.

Evans set to work trying to translate the tablets. All of the tablets appeared to be bureaucratic records, mainly lists or inventories. Evans quickly worked out the numbering system, since several tablets included lists of numbers with a figure at the bottom that was clearly the total. From the number of signs, around 80, Evans deduced that the system syllabic, each sign representing a syllable. But there he stuck. He kept banging his head against the problem for the next 40 years, with little to show for it. Because he was determined to solve the problem himself, he was very grudging about sharing his tablets with other scholars; as late as 1945, only 200 of the more than 2,000 Linear B inscriptions in Evans' possession had been published.

But with those 200 inscriptions, other scholars went to work. One of them was Michael Ventris, who vowed to decipher the script at 14 after a school group of which he was a part blundered into Evans during a museum tour, and Ventris heard the great archaeologist himself say that the tablets remained a wonderful mystery. But Ventris was not from a wealthy family, so instead of a university he attended architecture school, and as is the way of human life he soon had a family to support and a career to get on with. Still, he worked on Linear B every chance he got.

Another was Alice Kober, a professor of classics at Brooklyn College. Kober was also fascinated by the script, but unlike Ventris she was a methodical, careful researcher who knew something about how unknown scripts are translated. She worked by creating a stack of note cards, eventually more than 200,000, for each character, each word, and each pair of characters, which she could sort by the position of holes punched in the cards. Using these cards she was able to make several important discoveries about the script.

First, she discovered that the language of Linear B was inflected. She realized that many of what seemed to be nouns appeared with different endings. This was a vital clue that would play a big part in the eventual decipherment. She also looked closely at the character at the start of the ending, which she called the "bridge" character. Working with these, she realized that some characters were probably the same consonant with different vowels; compare ser-vi/ser-vo in Latin. 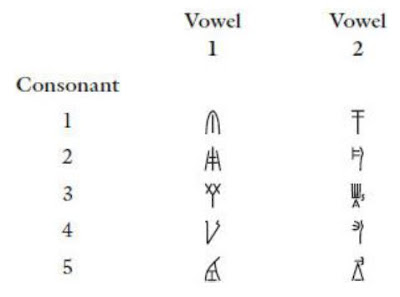 From this insight she began to construct a grid of signs that seemed to begin with the same consonant, like this. She was also able to recognize that some of the signs must represent pure vowels, since they appeared mainly at the beginning of words.

And there, sadly, Kober left the problem; shortly after completing the third of three major articles on Linear B, she fell ill and died in 1950 at the age of 44. Fox is a big fan of Kober and very much talks up her contribution. To Fox, Kober is yet another of the hard-working but largely unknown women who have done the basic work that famous, brilliant men relied on in making their prize-winning discoveries. (Like Rosalind Franklin in the unraveling of DNA's double helix.) Fox believes that Kober was on the verge of translating Linear B in 1948, and would have done so if she had been blessed with a few more years of good health.

I rather doubt it. Kober was successful in what she did partly because she very much resisted any sort of intuitive leap or guess about the script. She hated it when people assumed that the language of the script must be this or that -- Ventris thought for more than a decade that it must be Etruscan, which Kober found ridiculous. Yet it was just such a leap, his realization that the language might be Greek, that allowed Ventris to untie the knot. Some problems can only be solved by two different kinds of people working together. 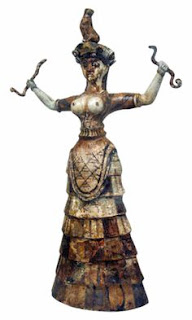 Or three, if you consider that it took an egomaniacal aristocrat to carryout the Knossos excavations in a period of civil war and then bring the attention of the world to his discoveries. 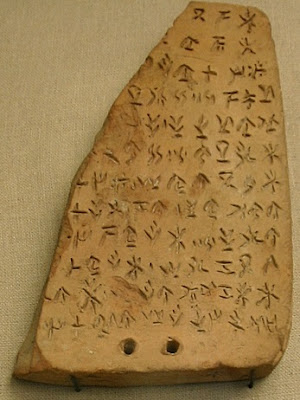 Ventris cracked the code like this: he was comparing the tablets from Crete with those from another site, Pylos, and he noticed that both sets of tablets contained three or four words that did not appear in the other set. He asked himself, what sort of word would the bureaucrats of one place write, but not those of another? Place names! So he began trying to read the words unique to Crete as place names. The names of all the Greek towns on Crete in the classical period were known, and since those names were not Greek they were presumably inherited from earlier peoples and were therefore very ancient. Here we come to a part of the story that I either never knew or forgot. I thought the decipherment of Linear B was remarkable because there was no bilingual inscription to provide clues, but this was not quite true. There was another script, the so-called Cypro-Minoan syllabary, which looked rather like Linear B. This could be read because there were Greek inscriptions from the sixth century BCE written in both Cypro-Minoan and the Greek alphabet. Cypro-Minoan (above) was not identical to Linear B, and dated to more than 600 years later. Also, many people (including Evans, Ventris and Kober) had tried to read Linear B simply by using the phonetic values of Cypro-Minoan, and had failed. But when Ventris was staring at his place names he tried inserting syllable values from Cypro-Minoan. Using one of the most similar signs in one of the names gave him __ - __ - ni __. From Kober's work he knew that the first syllable was a pure vowel, and he strongly suspected that it was a. So then he had a - __ - ni - __. This looked very like a - mi - ni - so, which is how Amnisos, the classical name for the port of Knossos, would be written in Linear B. Plugging the new values back to the grid he had inherited from Kober, he was able to recognize another place name as __ - no - so; if the first syllable was ko, he would have ko - no - so, Knossos. He was able in this way to identify all four place names from the Knossos tablets with classical towns. He then put all of the values from these place names back into the grid, which gave him values for more than twenty signs. He used the resulting values and more syllables from Cypro-Minoan to read the other words from the tablets. Amazingly, they looked like Greek. Some of the tablets including little pictures or ideograms that seemed to indicate what items were being inventoried, for example chariot wheels, shields, and horse heads. When Ventris tried to write the Greek words for these things in his primitive Linear B, he got something identical to, or much like, the actual words on the tablets. For example, the word next to some of the horse heads came out as fo -la, a Greek word cognate to our word foal.

Ventris could hardly believe that he was actually reading Linear B. In fact after announcing his discovery on BBC radio he went into a panic, thinking that maybe he was imagining things and had gotten it all wrong. Fortunately he hooked up with classicist John Chadwick, a scholar of early Greek who believed Ventris' work immediately because it fit into his own ideas about what the Greek of that period should have been like. Chadwick convinced Ventris that the decipherment was right, and together they wrote a book laying out their findings. 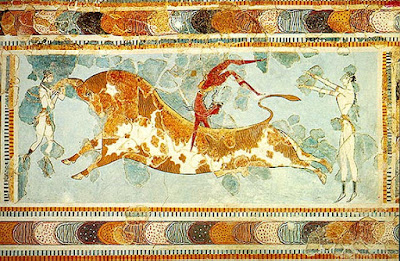 You may be wondering why it was such a shock that these ancient Greek tablets recorded an early form of Greek. The answer is that the scheme of Aegean history developed by Arthur Evans postulated that Minoan civilization was something radically different from the Mycenaean Greek world: much less violent, more feminine, more focused on art and trade than on war, with strange religious rituals unknown in later times. Evans associated the end of the Minoan world around 1400 BCE with the arrival of the Greeks, who must have stormed into the Mediterranean like Goths into Rome. Evans once remarked that the only thing he knew about the language of Linear B was that it could not be Greek. The discovery that Linear B did record Greek required a major rethinking of this scheme.

The work published by Ventris and Chadwick was at first very controversial. Ventris' scheme required that one Linear B sign correspond to two or more different syllables in later Greek, and critics complained that with such special pleading you could make the signs spell any language. Then a new tablet was discovered at Pylos, transliterated above. The words to the left of the drawing of a tripod cauldron read, in Ventris's Greek, Two Bronze Tripod Cauldrons. Who could argue with that?

So Ventris had done it, one of the great intellectual feats of the age. And then he moved on to other problems. One of the fascinating things about the story is that neither Ventris nor Kober had any interest in what the tablets said. All they cared about was penetrating the mystery of the script. Fortunately Fox includes a final chapter in her book showing how much has been learned about Minoan and Mycenaean society from the tablets: economics, taxation, social organization, political hierarchy, trade, the names of Gods and the gifts given to them. It is a bit disappointing that the tablets record not even a single scrap of chronicle or verse, but they are what they are, and it is amazing that we can read them. 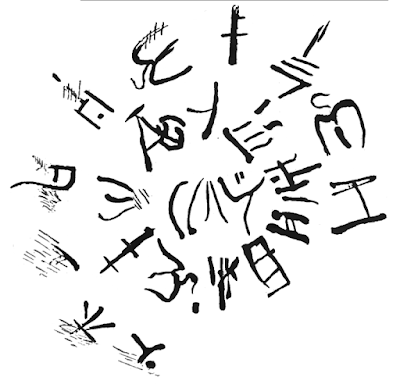 And if you feel disappointed that all the mysteries have been solved, remember that neither Linear A nor the Minoan hieroglyphs have ever been read. Have at it.
Posted by John at 8:27 AM