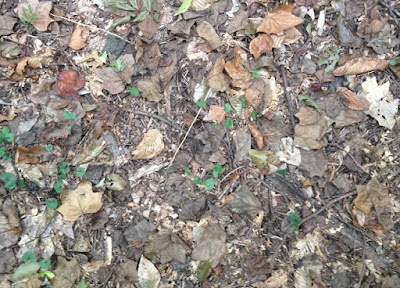 Natural camouflage is pretty tough to beat without relying on motion, or being able to view something from multiple angles. I could pore over this image for twenty minutes and still miss the frog, so I'm just going to guess at the first thing that struck me within 30 seconds or so of scanning.

In the center of the image is a white line that looks like a stick of a rhizome runner or similar. At the bottom terminus of that line there is a large dead leaf, spaced between the line and the little clump of green plant shamrock-esque plants. On that leaf is a dark spot that somewhat resembles a frog's eye.

Of course, it could just be a bit of dirt, or a bit of another decayed leaf, or pretty much anything, so I fully expect to be utterly wrong.

But of course, you actually being physically present were able to spot the frog, presumably either by it moving or by you moving and seeing it at another angle.

...unless this is all a trick challenge, meant to demonstrate the power of suggestion on the human mind!

Ahh, the brain is such a fascinating thing, no?

i think you're onto something. to my eye, that central piece of grass or rhizome runner points to what looks like a muscular little leg.

i took a related photo of a moth in bark mulch a few months ago. it's not quite as hard to see, but it's still remarkably well-hidden.