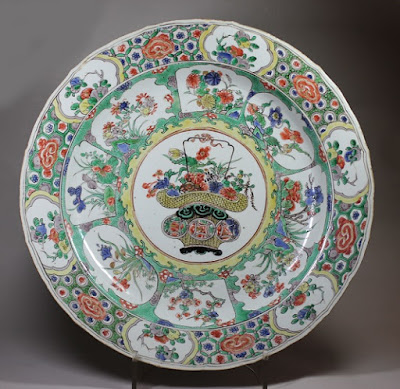 Huan Hsu in an American-born Chinese journalist who spent the first 25 years of his life trying to shed his Chinese ancestry and be as American as possible, "A rebellion that included working harder at sports than math and refusing to apply to Harvard." His interest in his family's Chinese past was piqued by a porcelain dish in the Seattle Art Museum. The dish was decorated with a square of 64 Chinese characters that the museum had not translated, so he asked his father what it said. It was a poem by the 18th-century Qianlong Emperor, his father told him, praising the artistry of the dish's makers at the imperial porcelain kilns in Jingdezhen. "One more thing," his father said, "Your mother's family once had some porcelain. You should ask her about it."

This chance encounter with a porcelain dish launched Hsu on a decade-long journey into his family's past. The porcelain in question belonged to Hsu's great-great-grandfather Liu Feng Shu (1867-1951), an educated man and small-time landlord in the Yangtze River town of Jiujiang. Jiujiang was the port at which porcelain from Jingdezhen was loaded onto river boats, so crates of dishes were always passing through the town. According to family stories, people who wanted to curry favor with Landlord Liu regularly gave him presents of porcelain, and he built up on impressive collection. When the Japanese advanced up the Yangtze in 1938, Liu buried the porcelain and his other valuables in his garden and fled, spending most of the war in Chongqing. He came back home in 1946 but with he civil war waging around him, the porcelain stayed buried. Some of Liu's grandchildren were Kuomintang officials, and after the Communist victory in 1949 the family was divided; some went to Taiwan or America, while others remained in China. Those who stayed in China were persecuted because of their landlord status, and of course their land was seized. A cotton mill was built over the house, and the porcelain was lost.

The Porcelain Thief (2015) describes Hsu's attempts to rediscover the lost porcelain. This takes him to China, first as an employee of his uncle's chip manufacturing company (he comes from a high-achieving family). As he slowly improves his Chinese and his knowledge of Chinese culture, he looks up his elderly relatives in China and Taiwan and talks to them about their past. He learns that the heart of his family in the war years was Landlord Liu's three granddaughters, born between 1911 and 1921. Liu was a very progressive man for his time, and he had his daughter and grand-daughters educated at the Rulison School, a girls' high school in Nanchang founded by American missionaries. At times these women all worked as teachers themselves, and their work helped keep the family fed and together. Some time in the late 1940s Liu heard one of his neighbors bemoaning the birth of a daughter; he said, "Don't regret having daughters, it was my granddaughters who helped me the most."

Hsu is ambivalent about China. He is put off by the rudeness, the shoving, the car horns, the rampant destruction of everything old and beautiful, the politics, the naked ambition to get rich at any price. But he is also attracted to the energy and sense of hope that he finds everywhere. After studiously avoiding learning anything about China in his youth, he becomes fascinated with the events through which his family lives. One of the best things about the book is that it recreates, to some extent, Hsu's initial ignorance and gradually increasing knowledge. In the twentieth century China experienced as much history in a century has anyplace ever has, and the experience of Hsu's family brings much of it to life. It is not as good a book as Jung Chang's Wild Swans, another family chronicle that I think is the best book on modern China. But I found it worth my while.

I especially enjoyed Hsu's journey to the porcelain city of Jingdezhen. My daughter Clara was born somewhere near Jingdezhen and spent part of her first year in the orphanage there. Plus, the whole place is an archaeological site, the soil full of porcelain sherds from the past thousand years. After nearly disappearing in the de-nationalization of the 1990s, porcelain is coming back in the city, which is good to know; some traditions should not die.
Posted by John at 7:22 AM