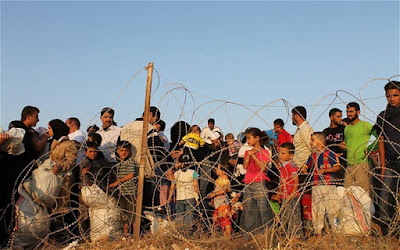 If you've wondered why I haven't said anything about the refugee crisis in Europe, it's because I don't have a clue. I do not believe that nations have an obligation to take in outsiders until their own national ways and habits are swamped. When you consider the problems that European countries already have with their African and Middle Eastern populations, I don't think you have to be a nationalist xenophobe to wonder about the wisdom of admitting millions more. The scale of the problem is gigantic -- people have praised Germany's "generous" offer to taken in more than 100,000 refugees, but at least 4 million Syrians have fled their country, and 7 million more have left their homes and become "internally displaced." There are millions more refugees from other wars, other disasters.


Your heart aches for the Syrian refugees flocking to Europe. And Germany’s generosity in absorbing so many is amazing. We have a special obligation to Libyan and Iraqi refugees. But, with so many countries melting down, just absorbing more and more refugees is not sustainable.

If we’re honest, we have only two ways to halt this refugee flood, and we don’t want to choose either: build a wall and isolate these regions of disorder, or occupy them with boots on the ground, crush the bad guys and build a new order based on real citizenship, a vast project that would take two generations. We fool ourselves that there is a sustainable, easy third way: just keep taking more refugees or create “no-fly zones” here or there.

Will the ends, will the means. And right now no one wants to will the means, because all you win is a bill. So the world of disorder keeps spilling over into the world of order. And beware: The market, Mother Nature and Moore’s law are just revving their engines. You haven’t seen this play before, which is why we have some hard new thinking and hard choices ahead.

I am even less sanguine about a military solution than Friedman, and anyway in the short term intervention would only create more refugees. I would also be happy to see the United States admit a few hundred thousand Syrian and Iraqi refugees, but given the current political climate that seems undoable. You can wish that Americans weren't so charged up about immigration, but they are, and in a democracy they can't be ignored.

Realistically, a whole generation of Syrians is going to grow up in refugee camps, and I don't think there is anything else to be said or done.
Posted by John at 7:26 AM