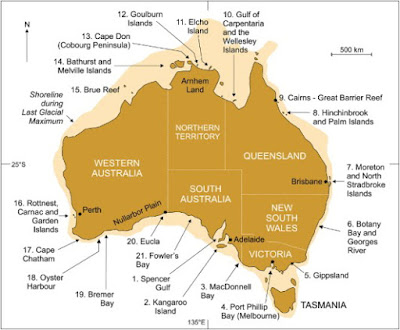 It is a hard and complicated question. On the one hand certain myths, archetypal images, and associations can be preserved for tens of thousands of years; consider that the world tree of the Maya is identical in many details to that of the medieval Norse and modern Siberians, apparently preserved for 13,000 years. But scholars who have studied more concrete traditions, such as accounts of actual battles or great earthquakes, say that they fade away after 500 or at most 800 years.

Which makes a new article by Patrick Nunn and Nicholas Reid extremely interesting. Nunn and Reid have studied he traditions of coastal people all around Australia, many of whom have stories about lands inundated by the sea. The map above shows the sources of the stories they analyze, and the extent of land in Australia around 20,000 years ago. From their abstract:


Stories belonging to Australian Aboriginal groups tell of a time when the former coastline of mainland Australia was inundated by rising sea level. Stories are presented from 21 locations from every part of this coastline. In most instances it is plausible to assume that these stories refer to events that occurred more than about 7000 years ago, the approximate time at which the sea level reached its present level around Australia. They therefore provide empirical corroboration of postglacial sea-level rise. For each of the 21 locations, the minimum water depth (below the present sea level) needed for the details of the particular group of local-area stories to be true is calculated. This is then compared with the sea-level envelope for Australia, and maximum and minimum ages for the most recent time that these details could have been observed are calculated. This method of dating Aboriginal stories shows that they appear to have endured since 7,250–13,070 cal years bp. The implications of this extraordinary longevity of oral traditions are discussed, including those aspects of Aboriginal culture that ensured effective transgenerational communication and the possibility that traditions of comparable antiquity may exist in similar cultures. 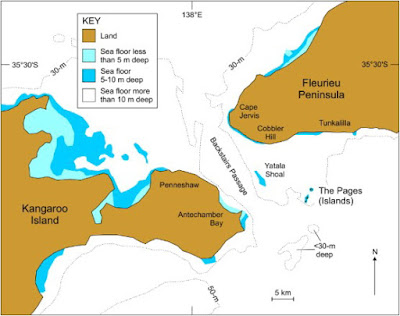 Two examples of of these traditions:


Kangaroo Island or Karta (4405 km2) lies at the mouth of Gulf St Vincent, its closest points to the Australian mainland being to the south coast of Yorke Peninsula (40 km) and across Backstairs Passage to the southwest end of the Fleurieu Peninsula (13.5 km). The earliest and most detailed versions of the story about the drowning of Backstairs Passage were collected from the Raminyerar and Jaralde peoples of the mainland. All involve an ancestral figure named Ngurunduri whose two wives ran away from him. He pursued them relentlessly along the south coast of the Fleurieu Peninsula, finally catching sight of them as they were crossing what was then a strip of land connecting it to Kangaroo Island across Backstairs Passage. Infuriated, he caused the sea to rise and drown them; the women and their belongings became the islands known as The Pages (Meralang) and the sea never again receded from the passage. 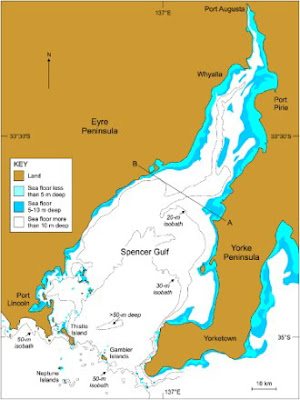 The Narrangga tribe living on Yorke Peninsula ‘had a story that has been handed down through the ages' which recalled a time when Spencer Gulf was dry land, ‘marshy country reaching into the interior of Australia'. In another account, probably from a different source, this country is described as ‘a valley filled with a line of fresh-water lagoons', each associated with particular types of water bird; the ‘open country between the lagoons' was occupied by ‘emus, curlews and mallee fowls' while elsewhere there were other creatures. Both versions of the story describe the initial flooding of the Gulf as having been catastrophic rather than gradual, the result of a mythical/giant kangaroo using a magic bone to cut a trench; ‘the sea broke through, and came tumbling and rolling along in the track … it flowed into the lagoons and marshes which completely disappeared'

I find these remarkable. As Nunn and Reid write, these traditions are different from the Genesis/Gilgamesh sort of flood story in that the flood waters never recede. In every case the description of the world before the flood is plausible; there is nothing parallel to Plato's crazy Atlantis, just ordinary stretches of land or mash. The flooding is said to have been catastrophic, but in fact that is how it happened in many places; the seas did not rise gradually, but in a series of strong "pulses," and this effect was multiplied in the sorts of bays and inlets where many of the Australian stories are set. These inlets might indeed have flooded rapidly when the seas breaches dunes across their mouths. Many of the tales attribute the flooding to a great ancestor or spirit animal, but one can hardly blame ancient Australians for not knowing about melting glaciers.

I think Nunn and Reid make a strong case that these stories are authentic folk memories, and the geology makes it clear that most of them are at least 7,000 years old. Amazing.
Posted by John at 7:03 AM

I must admit I know little of the Australian aborigines compared to other civilizations, but presumably their isolation from other cultures and largely nomadic lifestyle may have helped with the preservation of these traditions?

In the absence of large scale conflict with neighbors, I imagine a self sufficient society of hunters and gatherers would become relatively stable and unchanging, making it easier to preserve oral history over a longer period, as there would be fewer large cultural disruptions from war, conquest, and societal and governmental turnover.