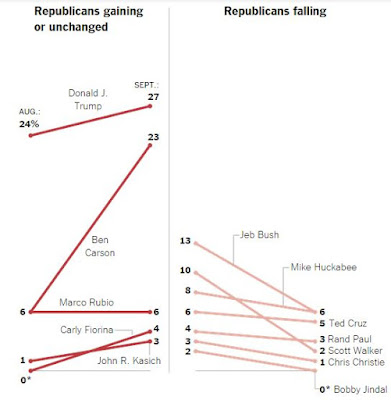 The latest NY Times/CBS News poll of likely Republican primary voters shows Trump still advancing, neurosurgeon Ben Carson rocketing into contention, and everyone else in big trouble. Jeb Bush has lost more than half of his support,and Scott Walker has slid all the way down to 2%.

One thing to note: suppose Trump eventually flames out, and Republicans realize that Hillary would eat Ben Carson for breakfast. Who is positioned to pick up the pieces? Could it be Marco Rubio in the corner, smiling in his awesome suit? He is certainly lucky enough.
Posted by John at 7:16 PM