The Myth of Pepper and Rotten Food 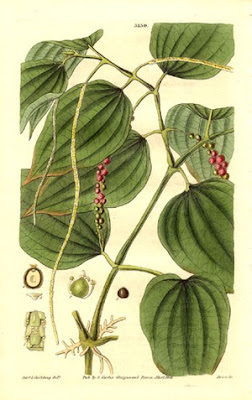 I got this lovely book out of the library, published by National Geographic, called Flora Mirabilis. It's a sort of contemporary herbal, with chapters about the growing knowledge of plants from ancient to modern times, little mini-chapters about certain famous plants with interesting histories (tobacco, bamboo, roses, grapes), and lots of lovely illustrations from old books. I flipped to the first of those mini-chapters, Black Pepper. And I read this:


The original purpose of spices was to mask bad flavors, in contrast to their purpose today of providing good ones. For many centuries, black pepper -- considered the king of spices -- was prized for its ability to hide the taste of rotting food.

THIS IS NOT TRUE.

I absolutely hate this idea. I have no idea where it came from, but it is all over in the culture, even in books published by National Geographic, co-authored by someone described as "one of the world's leading botanists."

First, rotting meat doesn't just taste bad, it is poisonous. Even if you hid the taste, assuming such a thing were possible, it would still make you sick.

Second, back in those olden days when this is supposed to have happened, black pepper was very expensive. No doubt there were people who sometimes ate dubious meat because it was all they could afford, risking illness to fill their bellies. They could not afford pepper. The people who could afford pepper did not have to worry about eating rotten meat.
Posted by John at 3:14 PM

What are your thoughts on the commonly cited drinking of beer as a safeguard to unsafe drinking water? Does this have any foundation in fact?

There are no medieval sources that describe this; the idea is a modern invention. Medieval people did not know that drinking pure-looking water could make you sick, since they did not know about microbes. Presumably they did not like bad-tasting or cloudy water, so where good drinking water was not available -- perhaps in larger cities or port towns -- some people may have drunk beer because the water was nasty.

But mainly medieval people drank beer and wine because they liked it, and liked being drunk.