The Communal Tradition of the Guaraní Indians 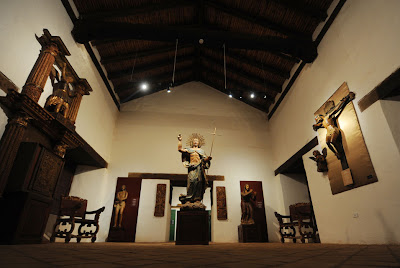 Archaeologists recently uncovered the tile floor of the 17th-century church at Santa Maria de Fe, one of the missions or reducciones founded in Paraguay by the Jesuits. Starting from a brief account of this archaeological discovery, I read around about the missions and discovered that their memory is still alive among the Guaraní. The poor Indians of Paraguay have strong communal institutions, and they see the Jesuit missions a part of that tradition. The story of these settlements was told in The Mission, which may be a little bit precious but gets the essential story right. The Jesuit missions were refuges where the Indians were protected from slave trading and the profits of the mission were shared equally among the residents. Above is the museum at Santa Maria de Fe, which shows works of art from the mission period (1647-1767). 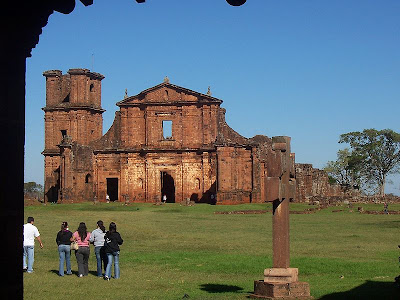 The Jesuits took advantage of ancient Guaraní prophecies of a "Land without Evil" where the Indians would one day reside, a recreation of the time before evil entered the world. The Jesuits equated the Land without Evil with the early church, and persuaded many Guaraní that they could enter this state by converting to Christianity. Above, the mission of Sao Miguel Arcángel, in Brazil. 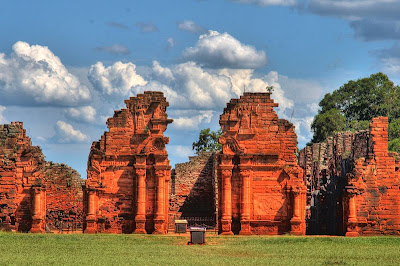 At the height of the  mission movement there were about 30 reducciones, with 100,000 to 200,000 residents.They manufactured watches and musical instruments, among other things -- the first movable type made in the new world was made in one of the missions. Each had its own orchestra and choir, and they performed original music written in the missions. Some achieved an adult literacy rate of nearly 100 percent. Above, ruins of the church at San Ignacio Mini. These impressive stone churches were built by the Indians themselves, under Jesuit direction. The reducciones were suppressed after 1767, on the orders of the Spanish crown, and many of the residents were enslaved. 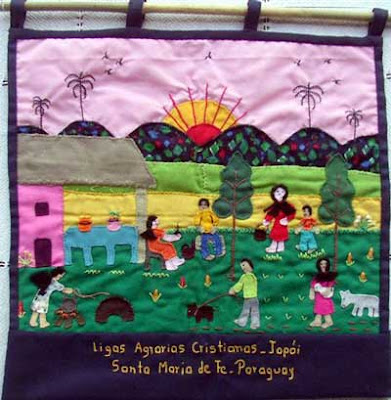 But the memory of the missions lived on. In the 1960s the Guaraní and other Paraguayan tribes joined the Ligas Agrarias Cristianas (Christian Agrarian Leagues) movement, which was widespread in South America. The key institution of the League was the Christian base community, a rural commune with a strong religious overtones. One of these communes was at Santa Maria de Fe, just down the road from the site of the Jesuit mission. Each base community has a church, a school, a farm, and usually some other money-making enterprise. They all had a strong ethic of sharing, but they differed in how much of the property was held in common; in some communities the farm fields and houses remained the private property of the members, who gave part of their harvest to the community in return for help of various kinds. The same system was used on the reducciones. 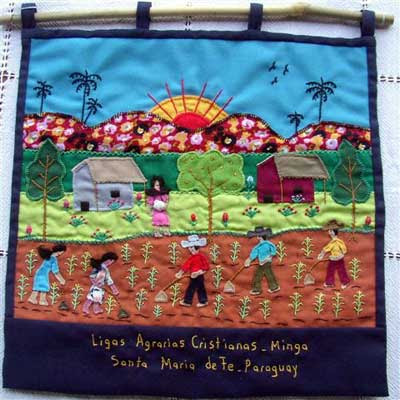 Some of the base communities in Brazil still exist, but those in Paraguay were suppressed by dictator Alfredo Stroessner in 1976. 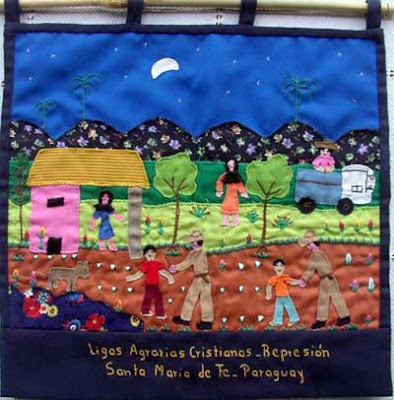 Now, though, the rural commune movement has come back to Santa Maria de Fe, and there is new communal high school along with other amenities. The work is supported by British charities. Among other things they sell these appliqué wall hangings, which tell the story of the Christian Agrarian League movement from its roots in Guaraní traditions -- mingo is a kind of shared work undertaken by neighbors helping each other, like plowing in medieval Europe -- to its suppression. I have decided to give a set of these to each of my conservative friends next Christmas. Don't they just radiate 1980s-era liberalism?
Posted by John at 1:51 PM