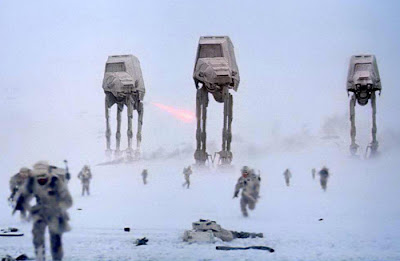 Spencer Ackerman points out the utter incoherence of the Empire's attack on the Rebel base in the Hoth System. Besides their loss of surprise, for which Vader strangles their admiral just as the battle is beginning, and their useless "blockade," which can't stop unarmed transports from leaving the system, there is the puzzlement of the ground assault. The point of the attack is said to be destroying the generator that is protecting the base from bombardment. But note how it unfolds:


The first phase of the battle is a ground assault launched against the generator. Vader devotes five (or maybe four, since Irvin Kershner’s directing isn’t consistent) Imperial AT-AT Walkers to the task. Vader sees no need to give them air cover, even though he’s tasted the quality of Rebel piloting during the destruction of the Death Star. Two of the Walkers are destroyed, one by Luke Skywalker’s Snowspeeder squadron, and another by Luke himself. . . .

But the surviving Walkers reach the shield generator and destroy it. But does the bombardment then commence? No!


Only Vader can’t bombard the base: He’s in it. For reasons that never get explained — and can’t be justified militarily — Vader joins the Stormtrooper assault on the base. So much for his major weapon against the Rebels, and the primary reason for ordering the Walkers to invade and destroy the generator. Once Vader opts to bring down the shield and lead the invasion, he’s lost the battle.

I mean, really. Is a small amount of consistency too much to ask?
Posted by John at 7:48 PM