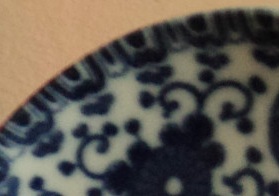 Twelve years ago I was carrying out an archaeological survey of the Prince William Forest Park in north-eastern Virginia. One of the places we tested was a small African American settlement known to its inhabitants as Batestown. These houses were abandoned in the late 1930s, when the park was set up. We were mainly trying to find out how old the settlement was, but as usual most of what we found in our quick survey dated to the end of occupation. On one of these house lots, amongst the usual dreck of a rural house abandoned in the 30s -- enameled pans, zinc washtubs, clear glass bottles, ironstone hotelware -- we found three or four sherds of a very striking blue and white pottery.

They were porcelain, their colors bright as sunshine against the drab iron and glass. The design was distinctive, and I found them lovely. I wondered what they were, but amidst all the tasks that came up at the end of that project, I never followed up. 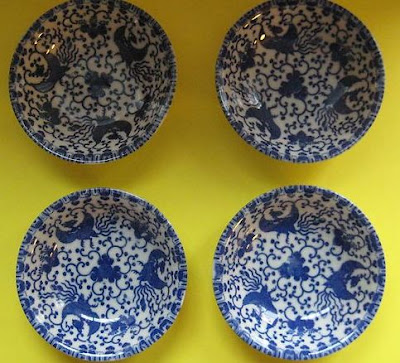 This afternoon I was standing in a friend's living room when I glanced at her China cabinet and saw the exact same design. She has a whole collection. "Phoenix ware," she called it. It came from her grandmother, she said, who got it because it was a give-away at her local movie theater back in the 30s. 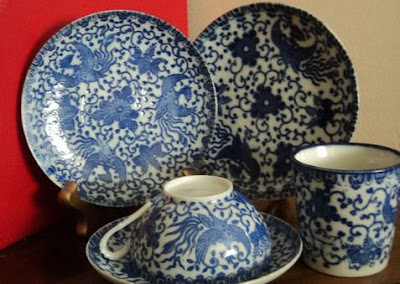 We googled various versions of "phoenix porcelain" and eventually found a bunch of lots for sale on Ebay, along with a description of the ware. It was made in Japan and imported into the US mainly between 1920 and 1950. It was sold at Woolworth's, among other places. There must once have been many thousands of these in American houses, but by now most have disappeared into landfills.

But there is still enough around that you can get a set for under a hundred dollars, and the next time I feel flush I think I may buy some saucers or bowls. Whenever I see them I will remember finding those sherds in the woods, and wondering how they came to be there.
Posted by John at 5:38 PM