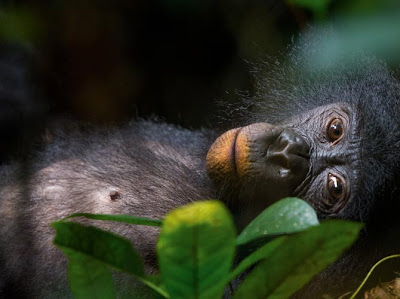 One of my themes when I write about nature is the importance of variation. Evolution acts on variation; a species cannot evolve if all individuals are the same. Bogus writers on human evolution are always making statements about what chimpanzees are like, or what human hunter-gatherers are like, that ignore the enormous range of documented variation.

So I welcome David Quammen's new article in National Geographic, documenting diverse behavior among bonobos. One of the stereotypes about bonobos is that they are peaceful and usually settle disputes amicably, perhaps with a quick sex act. And they are on average much less violent than chimpanzees. On average. But they do fight, and since those fights are infrequent they may be all the more important:


Hohmann mentioned other points of conventional wisdom against which he and Fruth dissent, including the notion that bonobo society is held together as a genial sisterhood by female bonding (they consider mother-son bonding at least as important) and the notion that bonobos aren’t aggressive toward one another. Aggression may be rare and muted, he said, but that doesn’t make it unimportant. Consider how subtle human aggression can be. Consider how a single violent act, or merely a mean one, can stick in a person’s memory for years. “I think this is just what applies to bonobo behavior,” he said.


But Fruth and Hohmann reported nine cases of hunting by bonobos at Lomako, seven of which involved sizable duikers, usually grabbed by one bonobo, ripped apart at the belly while still alive, with the entrails eaten first, and the meat shared. More recently, here at Lui Kotale, they have seen another 21 successful predations, among which eight of the victims were mature duikers, one was a bush baby, and three were monkeys. Bonobos preying on other primates: “This is a regular part of the bonobo diet,” Hohmann said.

The most important thing about both chimps and bonobos, with regards to human evolution, is that both are highly flexible. They vary their diet depending on what is available; the diet of one troop may include much more meat than that of another. They vary their social structure, with some troops being more hierarchical, others more egalitarian. Some individual chimpanzees fight a lot, others never. Some bonobos have sex all the time, others rarely. Generalization about animal behavior often turn out to be wrong, and that is certainly true about ancient humans.
Posted by John at 2:29 PM