Chandigarh is a city in India built from scratch according to plans drawn up by Le Corbusier -- if you ask me, the demolition of twenty traditional villages to make room for this horror is one of the greatest crimes ever committed in the name of art. That thing above is one of the more attractive buildings.

But even great crimes can have unintended good effects. In the case of Chandigarh, one unintended consequence of Le Corbusier's concrete nightmare is Nek Chand's rock garden.

In the 1950s Chand was a minor government official involved in building the new city. As he toured demolition and construction sites, he collected tons of cast off stone and broken ceramic tile. He took them, in secret, to a hidden ravine within a protected forest reserve and used them to begin building the rock garden. The garden was an attempt to recreate a vision of the divine kingdom of Sukrani. 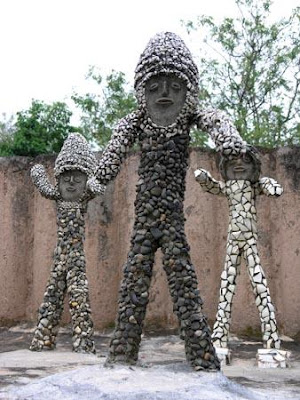 Chand worked largely alone for 20 years. Then in 1975 this illegal intrusion into the forest reserve was discovered by the authorities. For a time it looked like the garden, by then grown to 12 acres of courtyards and sculptures, might be demolished, but people rallied around Chand and forced the local administration to make the garden a public park. They even made Chand the salaried engineer of the park, and provided him with a staff of 50 workers. 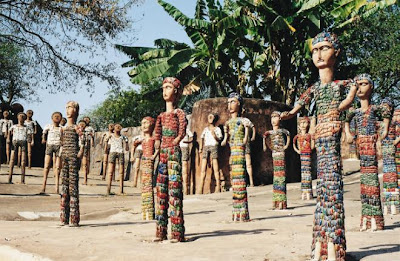 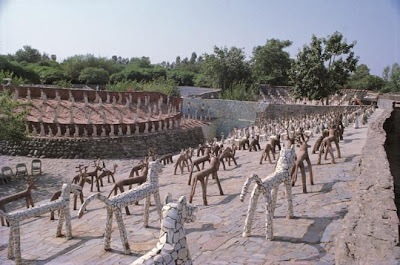 This situation lasted until 1996, when the government withdrew its support. Now the garden is maintained by the Nek Chand Society. It has grown to nearly 50 acres (20 hectares), and it is beloved both of the local people and fans of outsider or visionary art around the world. It draws about 5,000 visitors a day.

Everything in the garden is still made of discarded, recycled material. 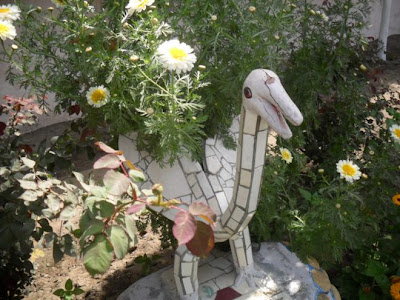 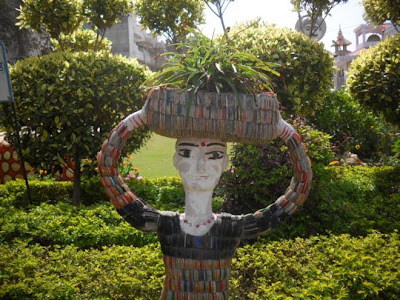 The Nek Chand Society's web site has many more pictures.
Posted by John at 2:27 PM