Penguin Bubbles, or, Science Uncovers Another Miracle of Nature 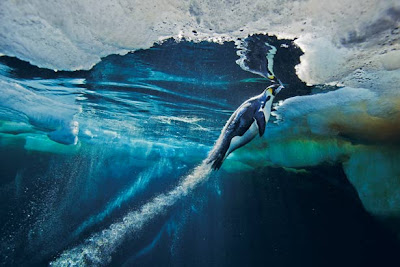 Marine biologist Robert Hughes knew nothing about penguins, but he had recently been talking to his wife about the properties of  the new high tech swim suits used by Olympic competitors. So when he saw a video of emperor penguins leaving a trail of bubbles through the water, he wondered what the bubbles were for. Did they help the penguins move faster? So he chatted up a friend, John Davenport, an expert in animal locomotion. But Davenport didn't know either, and when they reviewed the literature they discovered that nobody seemed to know. So they decided to find out for themselves:


With the help of Poul Larsen, a mechanical engineer at the Technical University of Denmark, they analyzed hours of underwater footage and discovered that the penguins were doing something that engineers had long tried to do with boats and torpedoes: They were using air as a lubricant to cut drag and increase speed.

When an emperor penguin swims through the water, it is slowed by the friction between its body and the water, keeping its maximum speed somewhere between four and nine feet a second. But in short bursts the penguin can double or even triple its speed by releasing air from its feathers in the form of tiny bubbles. These reduce the density and viscosity of the water around the penguin’s body, cutting drag and enabling the bird to reach speeds that would otherwise be impossible.

For me, the real significance of this is the sheer astonishment of it. Air lubrication is cutting edge engineering in the twenty-first century -- indeed, we would not have thought to look for it in nature if engineers were not working out how to use it on our own machines -- but penguins were there long ago. To know this reductive scientific fact about penguins does not make them less wonderful, but more so.
Posted by John at 10:53 AM