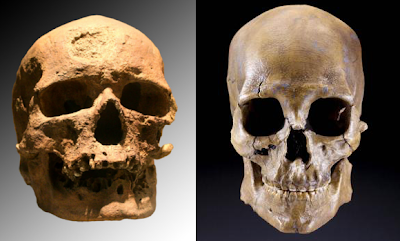 Modern humans don't look like our ancestors of 100,000 years ago: our faces are smaller and flatter, our skulls are less bony, and so on. There are various theories about why this might be, of which my favorite is self-domestication. The idea is that by living together in close-knit communities, we domesticated ourselves, giving a genetic advantage to those who can get along better with others.

And now, from the cutting edge of physical anthropology, some evidence that this theory is correct. Robert Franciscus and colleagues have posted this abstract for their upcoming paper at the annual meeting of the American Association of Physical Anthropologists:


Anatomically modern humans are recognized in the fossil record principally by a retraction and diminution of the facial skeleton, and other derived metric or discrete craniofacial features. There are several mechanistic models for this important morphological shift, but no consensus on which explanation, if any, is most accurate. A promising model for this shift argues that anatomically modern humans represent a ‘self-domesticated’ species where selection for behavioral modifications in the social environment led to developmental timing alterations, which then produced a cascade of diagnostic morphological shifts. Dog domestication from ancestral wolves provides a particularly useful comparative framework for this model. . . . Our results document an array of apparently parallel craniofacial changes occurring during both the archaic-to-modern human and wolf-to-dog evolutionary transitions. These results, considered in light of previous experimental work in other animal models (especially domesticated foxes), provide strong support for the ‘self-domestication’ model in anatomically modern humans.

In other words, we differ from our ancestors in the same ways that dogs differ from wolves. The famous Belyaev fox experiment has shown that you can get the full suite of domesticated traits by breeding for one variable, the willingness of the animal to be approached and touched by humans. So by living together in villages we may really have bred ourselves in the same way.
Posted by John at 1:05 PM