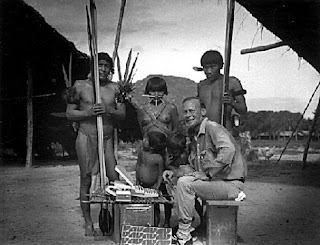 Marshall Sahlins, longtime University of Chicago professor and leading light of American cultural anthropology, resigned from the National Academy of Sciences on Friday. He offered two reasons for his resignation. The second was two partnerships for research between the NAS and the American military, and the first was the election to the NAS of Napoleon Chagnon.

Chagnon might be the world's most famous anthropologist; his book on the Yanomamö of Venezuela and Brazil, The Fierce People, sold more than a million copies and was assigned in thousands of courses. He might also be the world's most controversial anthropologist. He sees his work as a branch of evolutionary biology, and these days his most famous claim is probably that Yanomamö men who had killed other men had more children than those who had not, and therefore that violence was a successful evolutionary strategy.

As a statement about human evolution, Chagnon's claim is utterly banal; who doubts that violence can be a successful evolutionary strategy for men? You kill the other guy, take his wife, and have children with her. In Darwinian terms, you win. All the scientists out there are scratching their heads now, wondering what could possibly be controversial about this. Lions do it, elephant seals do it, humans do it.

But this misunderstands American anthropology. Anthropology in the US has always been only partly about studying humanity. It is just as much about offering a critique of western civilization, based on insights gained from studying other cultures, and of advocating on behalf of the threatened, indigenous peoples of the world. From World War I to Vietnam, the first was primary, and anthropologists were mostly fighting the patriarchy and its militarism. So you can see why Chagnon's work is offensive to the followers of Margaret Mead. These days, it is advocacy for threatened cultures that mainly exercises anthropologists, and it is here that Chagnon has really gotten himself into hot water. As a scientist, he says, it is his business to study events, not shape them, and he has flatly refused to get involved in things like disputes between the Yanomamö and logging companies. Chagnon is also, it has to be said, a jerk, who routinely slings insults at his academic opponents and dismisses their work as "fluff."

Simmering dislike of Chagnon boiled over in 2000 with the publication of Darkness in El Dorado by journalist Patrick Tierney. Tierney accused Chagnon of a lost list of crimes that started with helping to start a measles epidemic among the Yanomamö so as to better study the development of immunity in a "virgin soil" population. That one has been pretty conclusively refuted, but other charges live on. The most serious is that the way Chagnon collected his genealogical data exacerbated the violent tensions that he found so fascinating.

Here, to give you an idea of the issues involved, is a passage from Marshall Sahlins' own review of Darkness in El Dorado:


The '60s were the longest decade of the 20th century, and Vietnam was the longest war. In the West, the war prolonged itself in arrogant perceptions of the weaker peoples as instrumental means of the global projects of the stronger. In the human sciences, the war persists in an obsessive search for power in every nook and cranny of our society and history, and an equally strong postmodern urge to "deconstruct" it. For his part, Chagnon writes popular textbooks that describe his ethnography among the Yanomami in the 1960s in terms of gaining control over people.

Demonstrating his own power has been not only a necessary condition of Chagnon's fieldwork, but a main technique of investigation. In a scientific reprise of a losing military tactic, he also attempted to win the hearts and minds of the people by a calculated redistribution of material wealth, and in so doing, managed to further destabilize the countryside and escalate the violence. Tierney quotes a prominent Yanomami leader: "Chagnon is fierce. Chagnon is very dangerous. He has his own personal war." Meanwhile, back in California a defender of Chagnon in the e-mail battles has lauded him as "perhaps the world's most famous living social anthropologist." The Kurtzian narrative of how Chagnon achieved the political status of a monster in Amazonia and a hero in academia is truly the heart of Darkness in El Dorado. While some of Tierney's reporting has come under fire, this is nonetheless a revealing book, with a cautionary message that extends well beyond the field of anthropology. It reads like an allegory of American power and culture since Vietnam.

Vietnam, Vietnam, Vietnam; for American leftists of a certain age, it defines everything. And note that as in so many other cases, sensitive anthropologists have adopted what they say is a better spelling of the tribal name, so as to distinguish themselves from imperialists. But there are real issues with Chagnon's fieldwork. His funding came from the Atomic Energy Commission, which wanted to study the mutation rate in a population that had no exposure to nuclear contamination. Chagnon's assignment was to collect blood samples and genealogical information from as many people as he could, across dozens of villages. This prevented him from developing the kind of close relations with informants that ethnographers value, and it led him to employ questionable tactics in getting those crucial samples. Sahlins again:


Needing blood and information quickly, Chagnon would announce his visits to a village in the guise of a Yanomami warrior: dressed only in loincloth, body painted red, feathered--and carrying a shotgun. His field kits have been known to contain chemical mace and an electric stun gun. He tried to cultivate a reputation for dangerous magical power by engaging in narcotic shamanistic seances. When someone stole from him, he got children to inform on the thief; then he returned the favor by carrying off the latter's hammock until he got his stuff back. . . .

But he indeed had a delicate problem. He badly needed to know the people's names and their genealogies. This information was indispensable to the AEC biological studies. He was also engaged in an absurdist anthropological project, which he took seriously, of finding ancestor-based lineage institutions among a people who by taboo could not know, could not trace and could not name their ancestors--or for that matter, could not bear to hear their own names. To utter people's names in their presence is the gravest offense, a horror: "In battle they shout out the name because they are enemies." As for the dead, they are completely excluded from Yanomami society, ritually as well as verbally, as a necessary condition of the continued existence of the living. But for the sake of science, Chagnon had to know--and so set in motion an opposition between their humanity and his epistemology that developed progressively through his professorial career. Chagnon invented draconian devices for getting around the name taboos. He exploited animosities within the village to induce some people to tell on others. He "bribed" (his quotation marks) children to disclose names when their elders were not around. Most productive of all, he went to enemy villages to get people's genealogies, and then confirmed the information by seeing if they got angry when he recited the names to their faces. By the early 1970s Chagnon had collected some 10,000 Yanomami names, including 7,000 names of the dead. It must have caused a lot of pain and hate.

The Yanomamö are one of those societies that enforce equality through intense jealousy; when anybody has anything that his peers do not, they hound him until either he shares or violence breaks out and the excess wealth is destroyed. To get the cooperation he needed, Chagnon handed out valuable presents -- knives, axes, kettles -- to certain people while denying them to others. According to his critics, this led to fights and even killings, which Chagnon then filmed for western audiences. He stirred up so much trouble that in 1976 the government of Venezuela banned him from doing any more fieldwork.

Fast forward to the 1980s, when Chagnon started claiming that his genealogies show the benefits of violence for men. Your genealogies are bunk, said his critics, and if your subjects were killers it was only because you instigated the rivalries behind those killings. Furthermore, they said, Chagnon misunderstood Yanomamö society and counted as killers men who were said to have killed by sorcery, and even those who shot arrows into a dead man as a way of saying that they would have killed him if given a chance. Chagnon answered that he had worked very hard to get that genealogical information -- which, really, nobody can deny -- and if his critics don't like his results, they should do their own studies. But of course the sort of anthropologist whose very identity is based on embracing the outlook of the people he or she studies cannot even ask a Yanomamö man his name, let alone his ancestry. So the status of those genealogies remains up in the air, and people seem to react to them mainly based on how they feel about the whole enterprise of sociobiology. I am dubious myself. One of the big problems with studying human evolution is that we give meanings to words like "brother," "cousin," and "murderer" that are rather different from the ones evolutionary biologists give them, and the ambiguities involved in asking the Yanomamö about fatherhood and feuding seem to me to be too great to place a lot of numerical faith in the answers.

The most serious criticism of Chagnon's evolutionary argument is that he met the Yanomamö at a time when their culture was being rapidly destabilized by contact with outsiders. If it was not Chagnon himself who upset their traditional arrangements, the entry of loggers, prospectors, government officials, traders, tourists, and others into the region certainly did overturn the old order. Can the rate of violence in such a society at such a time really tell us much about evolution in the distant past? Probably not. But on the other hand, can anybody look at the fierceness of the arguments that Chagnon has set off and say that we are not an inherently violent species?
Posted by John at 8:48 AM

Survival International has compiled a list of materials from experts, anthropologists and the Yanomami themselves on the Chagnon debate, and how Chagnon's work has been disastrous for the tribe.

Visit http://www.survivalinternational.org//articles/3272 for statements from Davi Yanomami, Eduardo Viveiros de Castro, Philippe Descola and Manuela Carneiro da Cunha, and an open letter signed by over a dozen anthropologists who have worked for years with the Yanomami and who 'disagree with Napoleon Chagnon's public characterisation of the Yanomami as a fierce, violent and archaic people.'