Napoleon's Soldiers and the Power of Experience 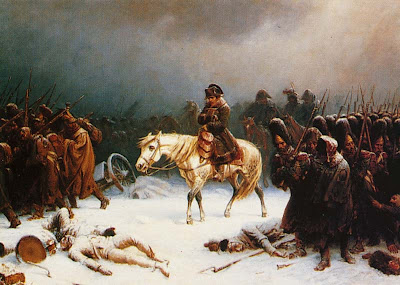 Reason plays a very limited role in human life. Emotion matters much more, and powerful emotional experiences matter most of all.

I was just reading a so-so book about the diplomatic and political history of Europe during Napoleon's imperial reign, from 1803 to 1815. In 1805, 1806, and 1809 Napoleon led his armies across the continent on great marches and into great battles, winning victory after bloody victory, forcing the Austrians, Prussians, Swedes and Russians to bow down to him. But having won a dominant position on the continent, he could not enjoy his victory. Always restless, always dissatisfied, nervous that his power in France depended on military glory and would fade in peacetime, he kept making more demands and searching for more victories. Eventually he drove Russia's Tsar Alexander I to defy him, and he raised another great army and in 1812 he invaded Russia. Of the 400,000 men he took in, only 20,000 marched out under his banners. At least 200,000 died.

But not even this catastrophe dampened Napoleon's enthusiasm for war. He raised new armies, and when Russia and Prussia marched into western Germany, determined on his overthrow, he beat them in two battles. He could have had peace again at that point, by giving up only a little of what he had conquered, but he believed that he was on the verge of another total victory and resolved to fight on. But this brought Austria into the war against him, and together all the other powers of Europe smashed his forces at Leipzig. Still Napoleon would not sue for peace, but returned to France and raised yet more armies, this time of teenage boys and aged veterans because there was no one else left. He led them to a few more victories on France's borders before the great weight of the allies' power finally drove him off his throne. France was by this time bankrupt, half its provinces in revolt against Napoleon's unending demands for money and men, its economy badly damaged by the 25-year war with Britain that had devastated French trade.

Napoleon was sent into exile on Elba, and a member of the old Bourbon house was put on the throne of France as Louis XVIII. Less than a year later, though, Napoleon escaped and returned to France with an "army" of 750 men. This is when the thing that fascinates me happened. All across France, soldiers who had been incorporated into the new army of Louis XVIII repudiated the king and proclaimed Napoleon their once and future emperor. "You ask us to say, 'viva le roi,' one old sergeant told his commander, "but we will only say 'viva l'empereur.'" A hundred thousand veterans rallied to Napoleon's banner, and he swept into Paris. Among the rest of the population there was little enthusiasm for Napoleon's return, but the army acclaimed him and eagerly marched under his command toward Belgium, where despite terrible losses they fought with great determination against the British and Prussians at Waterloo.

Some of these men admitted that Napoleon had made terrible mistakes, and even committed crimes. Many thought he had pushed too hard and should have made peace in 1809 or 1812. But still they followed him to the death.

The experience of following a great leader on a difficult and dangerous campaign that culminates in victory is, for some men, an experience that dwarfs all others. In rational terms, Napoleon's soldiers had no greater enemy than Napoleon himself. After 1803, all of his wars were of his own making; he fought only for his own power and glory. On the altar of his limitless ambition he sacrificed three hundred thousand French soldiers. He drove them across the continent on forced marches, sometimes under terrible conditions, and threw them forward in assaults that were certain to kill thousands even if they succeeded. For this, many of them loved him. Under his leadership they did the impossible, and no rational considerations weighed against that. Napoleon was short, unattractive, cruel, greedy, and had no concern for human life; he nearly ruined France; but for a while he made his soldiers heroes. When he called, they followed, to the end.

The main thing I have learned over the course of my adult life is the power of intense emotion. People do, every day, things that seem crazy. People with glittering careers embark on mad affairs that bring them down. Gamblers risk everything on a spin of the wheel and end up bankrupt, even homeless. Cavers crawl through tiny cracks a thousand feet under the earth, seeking chambers that no human eyes have ever beheld. Beaten women go back to their abusers, because the power of a love that makes people crazy with anger can also create ecstasy.

All our doubts about the corrupt business of professional sports and the cruel damage inflicted on athletes can be swept away by the thrill of following a team through a season of ups and downs and tense last minute victories to a championship. The athletes experience the same thrill, with even greater intensity. Over the past few years I have read several interviews with aging football players whose bodies are wrecked and whose minds are in great danger. Without exception they say they would do it again tomorrow, because the experience of playing football was so powerful than they cannot imagine having lived without it.

The Epicureans were dead wrong about what motivates people: we do not flee pain and trouble, but on the contrary we seek them out. Not always, of course. The pull of the heroic is balanced by the urge for safety, rest, and peace. No doubt many soldiers hated Napoleon and only wanted to go home. But for hundreds of thousands, he was the greatest man of his time, and the only leader they would ever hail.
Posted by John at 11:38 AM

What is important to understand about Napoleon is that he was first and foremost a republican - he was loyal to the principles of the Revolution, and his mission was to "rid Europe of the kings". His eventual self-coronation as "Emperor" was specifically designed to infuriate European royalty and their bourgeois apologists, none more so than the English. Napoleon's men knew that, and were an essential part of the scheme - and besides, they respected him for realizing the institutions of state that the Revolution had promised, and were designed for their benefit. By donning the ermine robes, this defiant Corsican engaged in a parody of royalty which took up the transformation of European politics begun by the Revolution, and which was not substantially achieved until after the First World War, some 120 years later.
Napoleon's motive has been consistently misrepresented for the past 200 years in the English-speaking world as being about power and glory - it had nothing to do with that! When he saw a Bourbon back on the French throne, it was simply too much for him and for the rank and file who loved and supported him - that is why he came back. He felt that otherwise his work to establish the supremacy of republican thinking would have all been in vain.

I think that to Napoleon's core supporters the whole Republican thing had ceased to have much meaning by 1807, except as another sign of their hero's forward-thinking views. It was all about action, change, dynamism, not elections or human rights.