The General and the President 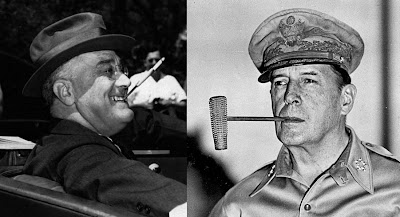 One of my favorite parts of Thomas Ricks' The Generals was the section on Franklin Roosevelt and Douglas MacArthur. When Pearl Harbor was attacked MacArthur was the US Army's commander-in-chief in the Pacific, which put him directly in the path of the Japanese advance, and he played a large role throughout the war.

But why? George Marshall, Army Chief of Staff, hated MacArthur, and MacArthur's dismal performance during the defense of the Philippines would have been a perfect excuse to sack him. (The forces MacArthur had to defend the islands outnumbered the Japanese attackers by 3 to 2.) Yet Marshall, who relieved hundreds of other commanders, left MacArthur in place.

According to Ricks, Marshall did so because Roosevelt ordered him to. Roosevelt wanted MacArthur in the army because he feared the damage MacArthur would do if he were outside it and free to criticize Roosevelt's handling of the war. MacArthur was a politically ambitious man -- he tried to get the Republican nomination for President in 1944 and again in 1952 -- and his politics were far right, almost fascist. Roosevelt once remarked that the two most dangerous men in the country were MacArthur and Huey Long. On another occasion Roosevelt said that to keep the whole country united behind the war effort he needed a war hero with bona fide anti-New Deal credentials. MacArthur, of course, fit that bill perfectly.

Roosevelt and MacArthur met once during the war, in Hawaii in 1943. MacArthur was supposed to brief the president and discuss strategy. Instead he lectured FDR about the political, electoral implications of not returning to the Philippines, offering a detailed rundown of how this would hurt the president and the Democrats in various states. Roosevelt's aides were outraged, but the president himself was all smiles. As Ricks says, he was probably relieved to discover how naive MacArthur was about American politics.

It's a fascinating glimpse of the political wheels within wheels that are part of anything as big as a war, and another look at Roosevelt's astonishing political acumen.
Posted by John at 4:30 PM