Conquest and Population Replacement at Xaltocan 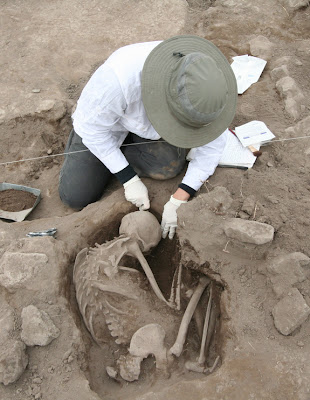 One of the major unsolved questions about human evolution in recent times concerns the impact of warfare. To what extent do conquering peoples genetically replace the people they conquer? Obviously it must have varied from case to case, but some archaeologists hold fairly radical positions on the question. For example, I have been told with complete conviction that the Anglo-Saxons made a negligible contribution to the gene pool of the British isles, and that the Romans made no contribution at all.

Thus my interest in a small study that has been done by Lisa Overholtzer and colleagues of DNA from the Mexican city of  Xaltocan. Xaltocan was conquered by the Aztecs around 1435.  The archaeologists used a sample of 25 skeletons found in one part of the city, some from before and some from after the conquest. Examining the mitochondrial DNA, which passes through the female line, they found that the conquest created a dramatic genetic break. The people buried after conquest, male and female, were from a different population.

It's a very small study, yes, but it shows the sort of work that has become possible in this field. Studies based on old skeletons have a real advantage over those based only on living people, because you just never know how many sailors have slipped in over the years, muddying the genetic picture.
Posted by John at 2:15 PM