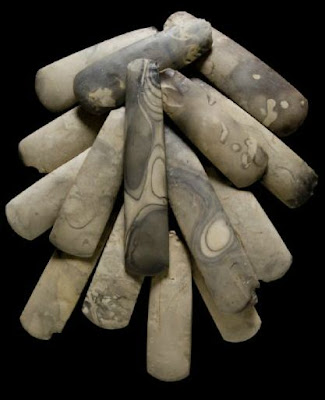 A new study of skulls from Neolithic Scandinavia shows that 1 in 6 adults had suffered serious  head trauma that was likely caused by a weapon. The anthropologists studied 478 skulls from Denmark and Sweden dating to between 3900 B.C. and 1700 B.C. Men had more non-lethal wounds, but women were just as likely to have died from blows to the head as men. The study was led by Linda Fibiger, an archaeologist at the University of Edinburgh in Scotland. 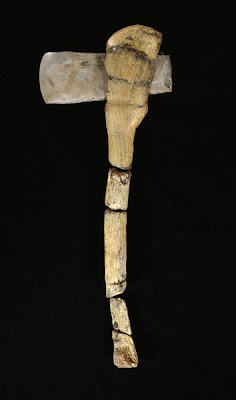 Perhaps we should have suspected that they were always knocking each other on the head, given the care and attention they lavished on making thousands of lovely stone axes. At top, a horde of polished flint axes from Ny Sct. Jørgensgård at Ringsted, one of dozens of such hordes that have been unearthed in Denmark. Above, a hafted ax from Sigerslev Bog near Præstø. The Danish Museum's web site has an extensive section on Neolithic Axes, should you wish to see even more.
Posted by John at 11:26 AM