Monterey Shale and the Future of Fracking 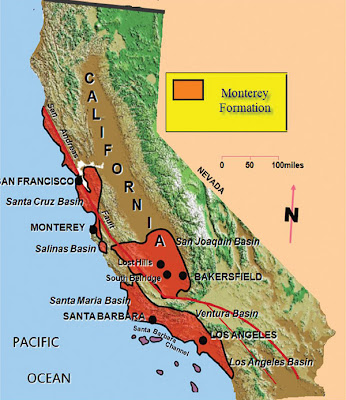 Thanks to fracking, the technology that allows us to extract oil and gas locked up in shale rock, energy production in the US is surging. North Dakota is experiencing an oil boom, Pennsylvania is being buoyed by natural gas. But the fossil fuel deposits in the rest of the country are small compared to the biggest, the Monterey Shale of California. As fracking technology gets better by the year, energy companies are looking to this deposit as the next big frontier.

Of course, California also has the nation's strongest environmental lobby, so look for big fireworks. At a minimum, California will impose much stricter regulations on fracking than other states have. But if they do so, and energy companies can make money anyway, look for those regulations to spread to other states. It is probably good news for would-be California prospectors that non-toxic fracking fluids are now available, including a brand from Halliburton that uses only ingredients approved as food additives. Not that this, by itself, resolves all the problems -- pollutants from fracking can end up in drinking water, and who wants drinking water contaminated with margarine? -- but at least it will greatly reduce the danger to public health that unregulated fracking undoubtedly presents.

For most of my life, doomsayers have been predicting that we are about to run out of fossil fuels. We are not. They are a finite resource, but they are also a very large one, and they will probably outlast me. This is important because it allows us decades more to develop the alternative technologies that are already becoming a reality; many things could happen to our civilization, but running out of energy is probably not one of them.
Posted by John at 9:57 AM