The Wombs of Bears 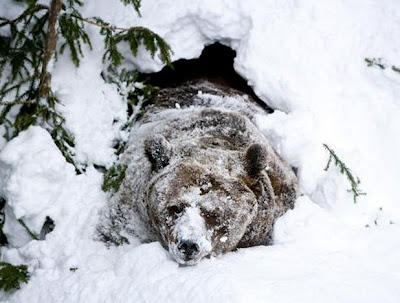 Bear reproduction is curious. It works like this: in the spring or summer, mother black, brown, and polar bears manage to approach close enough to a potential father to have bear sex, which is different from fighting only in that insemination somehow occurs. Their fertilized eggs grow into blastocysts. But then they stop growing for months while the mother tries to get fat enough to live through the winter.

Then, in late fall, the mother bear curls up in some cozy snow cave and goes to sleep. (Memo to scientific nitpickers: bears hibernate, regardless of what your narrow definition says. They spend months with a heart rate of 9 beats per minute, their metabolism reduced by more than half, and that's good enough for me and most bear experts.) 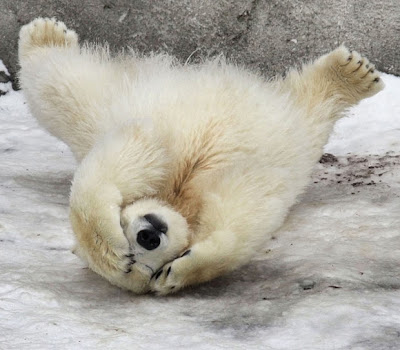 Once she is down for the winter, the mother bear's body starts to make calculations. If she has not gained enough weight to insure her own survival, her body expels the blastocysts and she has no baby that year. Otherwise her body allows one, two, or three blastocysts to implant in the womb and start to develop. Once this happens, gestation lasts only about two months. That means that in colder places bears give birth while still hibernating. Their babies find their way to the breasts and latch on, and so spend their first few weeks curled up with their sleeping mother. I know some of you human mothers out there are already jealous -- imagine giving birth in your sleep to the exact number of babies you can afford to raise! You would sleep through the initial, painful part of breastfeeding, too, and wake up with a surprise present of month-old, super cute bear cubs.
Posted by John at 8:32 AM