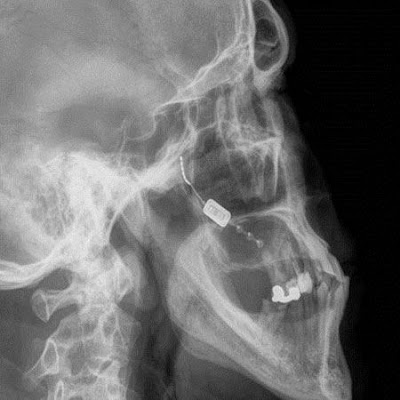 Researchers at the Cleveland Clinic have announced what they say are spectacular results in controlling cluster headaches --the worst kind -- using a device called an Occipital Nerve Stimulator. This consists of an almond-sized device inserted in the sinus cavity, with an electrode that leads to the a bundle of nerves called the sphenopalatine ganglion. The patient carries a small remote control device that triggers the implant when he or she feels a headache coming on.

Treating pain with electrical stimulation is an old idea, and there have been claims of great benefits for years now. A few patients with crippling headaches have been treated with implanted electrodes over the past decade, and some seem to have been cured. This latest machine, made by Autonomic Technologies, Inc., is an attempt to commercialize this approach and apply it on a large scale. They claim that in a European trial, 67% of patients experienced relief within 15 minutes, which is far better than any other existing treatment.

Not everybody believes this, though, and skeptics about electrical stimulation have been voicing their usual doubts about this new approach. We'll see. I note that the surgeon who developed the implanting procedure says it is "almost as easy as a wisdom tooth extraction," which hardly seems like an endorsement to me. But if it cures their headaches, thousands of people will take that trade.
Posted by John at 11:48 AM