The Stones of Carnac 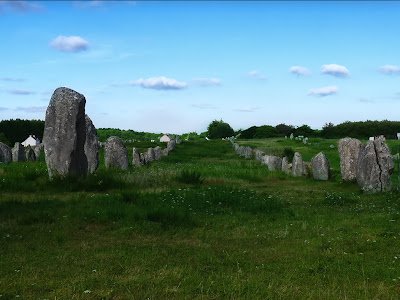 One of the most extraordinary monuments of the ancient world is the vast array of megaliths around the village of Carnac in Brittany, France. Today there are about 3,000, and there were once more than 4,000. Most famous are the three immense alignments, each containing hundreds of large stones arranged in parallel rows. But there is much else: six "great tumuli" as many as seven stone circles, a couple of "great menhirs," even a rectangle of standing stones (below). 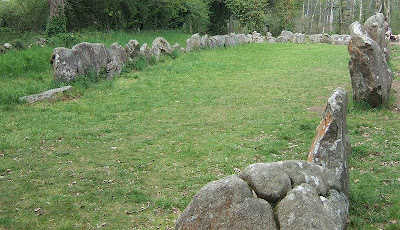 All of these were probably erected in the Neolithic period when, so far as we can tell, hardly anybody lived anywhere near Carnac. It's all very mysterious. Even the origin of the name is uncertain, some experts claiming an old Breton source, others saying the site was named in the nineteenth century after Karnak in Egypt. 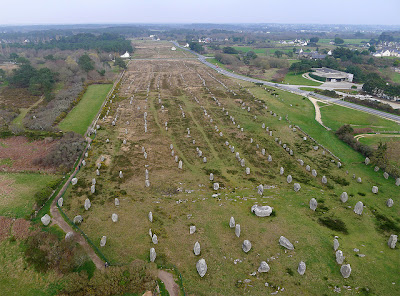 Who did all this work, and why? 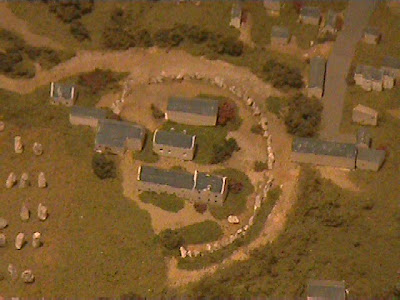 One of the problems with interpreting the site is figuring out how to date it. After all, just digging a hole and standing a rock in it doesn't leave a lot of evidence for archaeologists to interpret. We are much better at dating people's homes, where there is usually lots of broken pottery and often ashes from the hearth. But, as I said, nobody lived at Carnac. Diligent archaeologists have found a dozen or so datable charcoal samples from the whole complex, and while I am going to explain what they seem to be telling us, I caution you that this is a pathetic record -- any Swiss lake village has produced about a million time as much datable material as Carnac. 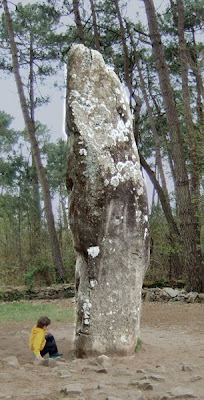 There seem to be at least two phases of construction. The oldest mounds have been dated to around 4500 BC, and this makes sense, since there are a bunch of other tombs in Brittany, Britain and Ireland of about the same age. Likewise, charcoal around the Grand Menhir at Lochmariaquer has been dated to around the same time, although it was not really found in close association with the standing stones. 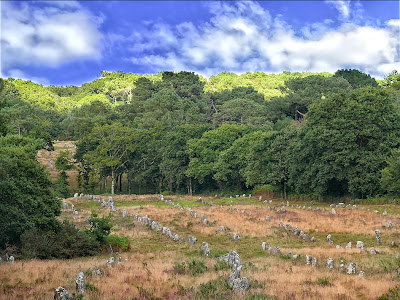 The great alignments must be later, because they cut across earthworks associated with the earlier mounds. A couple of radiocarbon samples have been taken from earthen banks that line the edges of the stone fields, and they come out around 3300 BC. This fits the theories of some archaeologists about how megalithic monuments evolved; for reasons I don't understand, these chaps want huge alignments to evolve around 3000 BC. But there are at least a hundred ways charcoal of the wrong date could end up in an earthen bank, and guesses about how things ought to have evolved are not reliable. This matters because it bears on the question of how long it took to build the massive alignments. 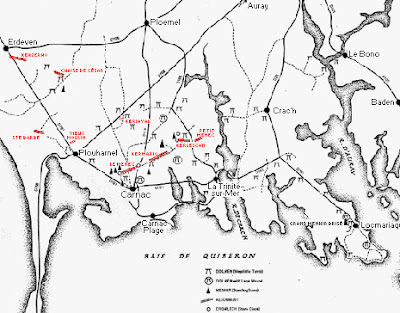 Note that from 4700 BC, the date of the earliest Carnac tomb, to 3300 BC is 1400 years. One thousand, four-hundred years was just as long in the Neolithic as it is now, and it is a really long time. Even allowing a few hundred years for those earthworks to have worn down and been forgotten, we still have a thousand years during which either nothing much happened or, as some archaeologists prefer, the alignments were slowly being built a few stones at a time. One obvious answer to the question, how did the small population of this area set up so many stones? is "one at a time." Perhaps, some have argued, setting up a stone was an annual event for people of certain villages, or else people from a wider area set up a stone to mark important events.  Under such a model, it would have taken centuries to complete the alignments. 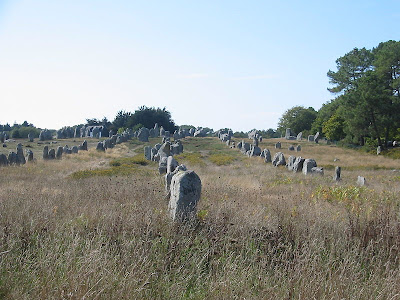 Other archaeologists prefer to think that each of the grand alignments was built as a unit, in a single operation stretching over decades at most. Really, we have no idea.

Unlike the other great, anomalous construction of the megalithic age, Stonehenge, the Carnac alignments do not have any astronomical significance. There may be alignments of various kinds within the overall suite of monuments around Carnac, as shown in the map above, but the alignments do not point at any particular sunrise or sunset. So we do not know how they we used. For processions? Or perhaps building the alignments was itself was the main "use," and they grew because people valued the ritual of erecting the stones. One French "archaeologist" thinks the whole thing was an ancient seismograph, but this strikes me as lunacy. A bowl of water measures tremors as well as a standing stone. 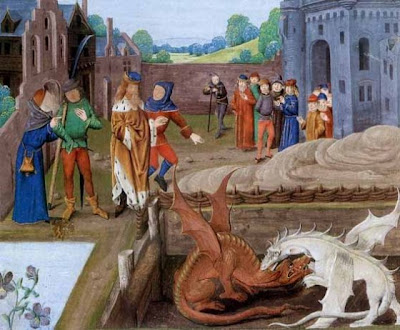 There are several old folk legends about the stones, of which my favorite is that they were a Roman legion turned into stone by Merlin. Makes more sense to me than the seismograph idea.
Posted by John at 9:08 PM