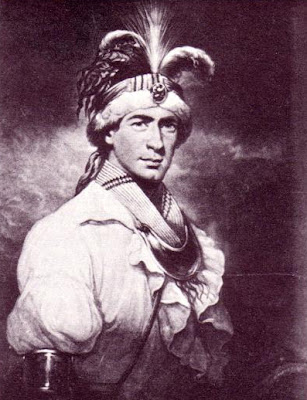 Wikipedia summary of the career of William Augustus Bowles:


Bowles was born into a wealthy Maryland Tory family, enlisting with the Maryland Loyalists Battalion at age 14 and becoming an ensign in Royal Navy by age 15. Cashiered for dereliction of duty after returning too late to his ship at Pensacola, Bowles escaped north and found refuge among the Lower Creek towns of the Chattahoochee basin. He married two wives, one Cherokee and the other Hitchiti Muscogee, and became heir to a Muscogee chiefdom. In 1781, a 17-year old Bowles led Muscogee forces at the Battle of Pensacola. After seeking refuge in the Bahamas, he traveled to London. He was received by King George III as 'Chief of the Embassy for Creek and Cherokee Nations'; it was with British backing that he returned to train the Muscogee as pirates to attack Spanish ships.

In 1799, Bowles formed the State of Muskogee, with the support of the Chattahoochee Creeks and the Seminoles. He established his capital at Miccosuki, a village on the shores of Lake Miccosukee near present-day Tallahassee. It was ruled by Mico Kanache, his father-in-law and strongest ally. Bowles envisioned the State of Muskogee, with its capital at Miccosuki, encompassing large portions of present-day Florida, Alabama, Georgia, North Carolina, and Tennessee, and incorporating the Cherokee, Upper and Lower Creeks, Chickasaw and Choctaw. Bowles' first act was declaring the 1796 Second Treaty of San Ildefonso which drew the boundary between the U.S. and West Florida null-and-void, because the Indians were not consulted.

He denounced the treaties Alexander McGillivray had negotiated with Spain and the U.S., threatening to declare war on the United States unless it returned Muscogee lands, and issuing a death sentence against George Washington's Indian agent Benjamin Hawkins, who won the loyalty of the Lower Creeks. He built a tiny navy, and raided Spanish ships in the Gulf of Mexico, and, in 1800, declared war on Spain, briefly capturing the presidio and trading post of San Marcos de Apalache before being forced to retreat. Although a Spanish force that set out to destroy Mikosuki got lost in the swamps, a second attempt to take San Marcos ended in disaster. After a European armistice led to the loss of British support, Bowles was discredited. The Seminole signed a peace treaty with Spain. The following year, he was betrayed by Lower Creek supporters of Hawkins at a tribal council. They turned Bowles over to the Spanish, and he died in prison in Havana, Cuba two years later.

Who could write such a story?
Posted by John at 8:03 PM