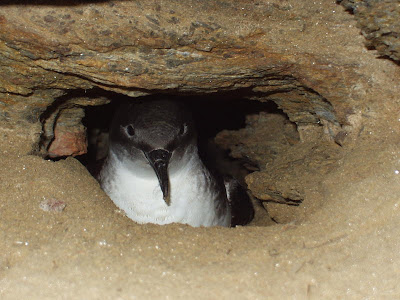 
The population of Yelkouan Shearwater of the French island of Le Levant is seriously under threat due to the invasion of feral cats, according to a French and Spanish joint study. The archipelago is home to the main colonies of this species.

Feral cats are considered one of the most dangerous invading species for animals native to Mediterranean Islands. . . .

"These seabirds only live on islands, which in the past were free from predators. As a result, they are agile at sea as they only eat fish and squad yet are feeble on the land," as explained by Elsa Bonnaud, lead researcher of the study in the Island Ecology and Evolution Group.

The Yelkouan Shearwater nests on the ground in small caves and is characterised by being clumsy. In other words, it cannot escape and its resources for defence are scarce because historically it has not evolved in the presence of predators. As a consequence, the cats may be causing yearly deaths of between 800 and 3200 birds. The fact that they are now the main component of the invading cat's diet could bring about the extinction of the colonies living on Le Levant.

See? That's a real study of the impact of cats on birds. Not just alarming numbers and hand waving.

And if it were up to me, I would handle it by killing all the feral cats. But that, it seems, is not a possible response in our gentle age:


"The best solution for all small, sparsely populated islands is to capture the cats in live traps and transport them to the continent. We did this on an island close to Le Levant, taking the cats to the vet and then giving them up for adoption. The results were excellent," states the researcher.

Win-win, I guess. Maybe even cat lovers and bird lovers can find ways to get along!
Posted by John at 6:47 PM

This is ridiculous. If it were packs of feral dogs, would there really be this hand-wringing?

Okay, okay, I can see an argument for trapping adoptable animals and going to all the expense of getting them medical care and finding them homes. I can see a better argument for killing the cats as cheaply and humanely as possible, and expending those funds on habit protection &c for these endangered birds.

In Australia, they tried to fence areas of the bush cat-free to protect their native bird populations. Cat-lovers who I can only describe as insane waged a campaign against this--a campaign that included chucking cats over the fence to "seed" the protected environment with felines.

Ever since I learned about that, I've been kind of unsympathetic to the 'no kill' arguments....

To cat people, all cats are lovable and cute, and arguments for killing them sound like arguments for genocide. Horse people are the same way. This makes biologists, who are trained to focus on ecosystems, roll their eyes, but cat people have a lot of political clout and biologists are learning that they have to engage with cat people and design their protective schemes so as not to offend cat lovers. If they act too cavalier about killing cats they will just be shut down.

We'd not have feral cats if we did not have pet owners who are irresponsible ->insert your favorite obscenity here ->s.

And non-feral cats should not be outdoors in any event. Outdoors presents dangers to domesticated cats, dangers that may cost owners their beloved pets.

Cats are *indoor* pets, like canaries or hamsters but much more wonderful.